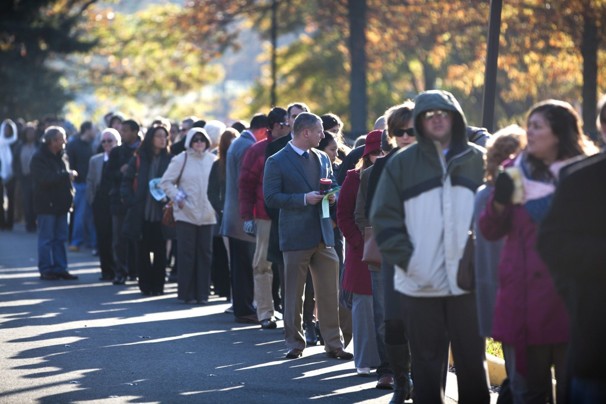 The Fairfax County Board of Supervisors voted unanimously Tuesday to create a special commission to examine problems on Election Day, namely long lines that forced some voters to wait hours to cast their ballots.

“The fact that so many people came out to exercise their right to vote is a good thing,” said Chairman Sharon Bulova (D), who proposed the commission. “That so many people had to wait in long lines for several hours was not. We’ll never know how many people gave up.”

The commission’s mandate will be to study a range of issues suspected of contributing to the lines — from equipment and staffing shortages to reports of poorly trained poll workers — and to return with findings and recommendations.

Two former county supervisors, Kate Hanley and Stu Mendelsohn, have agreed to co-chair the commission, Bulova said. Other members will be appointed by the current supervisors, the county Republican and Democratic parties, and outside groups such as the county chamber of commerce and the League of Women Voters.

They’ll begin their work in January, with recommendations expected by May.

While long lines were reported across the region on Election Day, the waits seemed especially protracted in Fairfax and Prince William counties. Some Fairfax voters didn’t have to wait at all, but others endured lines that snaked around buildings. Some left without casting a ballot.

Even though polls closed at 7 p.m., those in line by then were allowed to cast ballots. The last vote in the county was recorded at 10:30 p.m.

Among other problems, elections officials have blamed a shortage of poll workers, not enough touch-screen voting machines and a high turnout of 80.5 percent, compared with 78.7 percent in the previous presidential election.