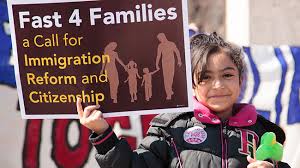 RICHMOND, Va. (WRIC) –Advocates for immigration reform have begun a four day hunger strike in Richmond.It’s part of the national “Fast for Families across America” campaign that is calling on lawmakers to vote on a comprehensive immigration reform.A tent has been set up in Monroe Park to serve as headquarters for its four-day stay.Cristian Avila, 23, is fasting for four days. "It was the only way that I could really look into my parents’ eyes and tell them that I did everything that I can,” said Avila.His family left Mexico and illegally entered Arizona when he was nine. He’s lived here for 14 years, but neither he nor his family have U.S. citizenship and could be deported at any time.He also went without food for 22 days last November to show his support for immigration reform. Faith, labor and civil rights leaders also fasted with him at the doorstep of the U.S. Capitol.Avila lost 26 pounds and doctors told him he had to stop because his body was eating its own tissue to survive. "Even though we grew hungrier and we grew weaker, our bodies… Our spirits were a lot stronger." Avila said during that time he, along with others in his group, received support from people all over the world.Avila said, "It's a lot bigger than just myself [me]. It's 11 million people, It's 11 million dreams and there's a lot, many, many children that want to see their families again.”Dozens of people have spent the last six weeks traveling across 30 states in buses for this year’s “Fast for Families across America” campaign. They hope the fast will touch the hearts of Republicans in Congress who have blocked a vote on immigration reform.Campaign leader Eliseo Medina said House Majority Leader Eric Cantor and Judiciary Committee Chairman Bob Goodlatte of Va. Have a moral responsibility to make sure a vote is held.Trip Director Heidi Pendergast said their message is to, “move forward on comprehensive immigration reform to have people actually take the steps to mend our broken immigration system that's tearing apart families. It's leaving people on the border to die over there. But really to see and end the broken immigration system to have families reunited."The tour will head to three more cities in Virginia before going to Washington, D.C. on Wednesday. While there the group hopes to meet with John Boehner, the Speaker of the U.S. House of Representatives, and present their case.They will also pass on the hunger strike to another group.Avila said he is prepared to fast again if it will help. "If I have to do it another 10 times i will do it again.”To learn more about the campaign visit the "Fast for Families" website.Copyright 2014 by Young Broadcasting of Richmond