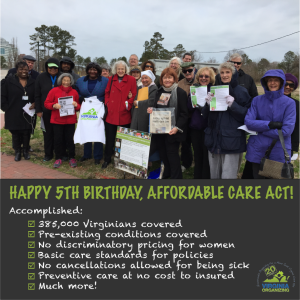 The Patient Protection and Affordable Care Act (ACA) has accomplished what 100 years of health care reform could not—for the first time, we have the lowest number of uninsured Americans in our history! Five years ago, on March 23, 2010, President Barack Obama signed the Patient Protection and Affordable Care Act, also known as the ACA, into law. Most Americans now have access to health care insurance through either a private marketplace or Medicaid. And we are accomplishing all this while decreasing the federal deficit.

Tragically, many are left behind in Virginia because of our refusal to expand Medicaid.

In 2012, the ACA was challenged in the U.S. Supreme Court. Commentators speculated for months that the Court might strike down all or part of the law, particularly the individual mandate that every person have health insurance. If the mandate were struck down, opponents of the ACA believed the law would not survive. The mandate and most of the law survived, but the Court surprised everyone by ruling that the federal government could not force states to expand Medicaid.

The ACA was written to provide subsidies or tax credits to people between 100 and 400 percent of the federal poverty line. Medicaid expansion would cover individuals and families up to 138 percent of the federal poverty line. Because we have not expanded Medicaid in the Commonwealth, hard working, tax paying Virginians are funding a federal program that they cannot access and being denied the health care they need. We’re losing money in Virginia because opponents of the ACA are choosing to make a political point instead of making sure constituents are covered.

Earlier this month, the U.S. Supreme Court heard a new challenge to the ACA. In King v. Burwell, plaintiffs argued that the Internal Revenue Service (IRS) illegally applied tax credits for people in states that participated in the federal Health Insurance Marketplace. Because of the subsidies, some of the plaintiffs had to purchase health insurance or face a tax penalty for failing to do so since the tax subsidy disqualified them from exemption. It’s a complicated argument that ignores the facts and history of the law—Republicans, Democrats, and the Congressional Budget Office all agreed that the subsidies would be applied to everyone, whether they were under a state-run marketplace or the federal one.

This newest challenge to the law has the potential to rob nearly 385,000 Virginians, and more than 8 million Americans of their health insurance coverage.

The opponents of the ACA are losing steam because Americans are seeing the advantages of the law. Young people are learning that they can stay on their parents’ insurance until age 26. Those who were previously denied health insurance because of a pre-existing condition are finding they now have affordable options. Those who had met yearly limits in the past learned that those limits were no longer legal. Women found out they could no longer be charged more for their insurance and were given access to necessary preventive care at no additional charge.

Across the nation, Americans are seeing that the ACA, while not perfect, is a good law that helps individuals and families get the health coverage they need at a price they can afford. I’m excited that students and their families in our district have more access to health care, but I’m also disappointed that many of our non-teacher employees fall into the Medicaid coverage gap and are unable to secure coverage.

The ACA came about with a lot of hard work and because people raised our voices, took action, and spoke truth to power.

As we celebrate the fifth anniversary of a law that has done so much good and look to the Supreme Court to make the right decision on a law that is functioning exactly as intended by Congress, let us not forget those who are left behind. We’ve covered almost 385,000 people and could cover almost 400,000 more with Medicaid expansion. It’s time to put away the attacks on the ACA and start embracing the good that the law has done and has the potential to do once fully enacted in Virginia.

Five years from now, I hope to be reflecting about the stubbornness of the General Assembly that was overcome by a will to do what is right and good for the people of Virginia instead of the special interests working to undermine our right to health care.

Dottie Holtz is an elected member of the Virginia Beach School Board and a South Hampton Roads Virginia Organizing Chapter leader.  She was arrested for civil disobedience at one of the health care actions in pressing for passage of the ACA in 2010.