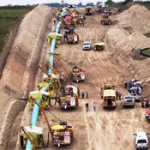 Originally posted by the Public News Service on March 24, 2015.

Isak Howell is an attorney with Appalachian Mountain Advocates, a non-profit that represents dozens of landowners along each line.

“These companies are proposing to use the right of eminent domain,” he says. “This is the extraordinary power to take private property against landowners’ wishes. It should not be granted lightly.”

Both projects would go through rugged, hard-to-build-in terrain. The companies argue the projects would put people to work and lower gas prices, which would be good for the economy. Howell says landowners don’t expect to see any benefit, just the negative impact on land and water.

“They’re definitely going to have a huge environmental impact out on the land,” says Howell. “The companies should be held to the letter of the environmental laws before these pipelines are ever approved.”

The Federal Energy Regulatory Commission will determine much of the future of both projects.

Both routes cross National Forests, which complicates the picture, and landowner lawsuits persist in state courts. Howell says many of the suits in Virginia may turn on whether a 2004 law violates the state constitution. He says the law gave public utilities the ability to use eminent domain, but after the law was passed the state constitution was amended to protect private property.

“Private property was a fundamental right, and it restricts the taking of private property for public use,” says Howell. “The problem with that 2004 statute is it is not constitutional. It violates the state of Virginia’s constitution.”

Each pipeline would cost billions of dollars, run for hundreds of miles and carry billions of cubic feet of gas a day. They are designed to carry Marcellus and Utica natural gas, generated almost entirely from fracking, to North Carolina and Virginia with connections further east.