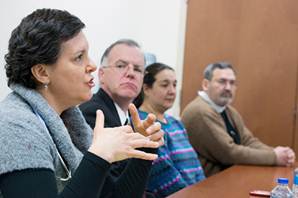 HARRISONBURG — Witnessing a public forum on the debate over expanding Medicaid that doesn’t involve a state lawmaker is a rarity.

But for the four people who participated in one Tuesday at the Harrisonburg Community Health Center, that’s the way it should be: take politics out of the situation to arrive at an answer.

And that answer, for this group, is to expand insurance to provide coverage to some 400,000 low-income Virginians.

“I cannot for the life of me fathom how one can expunge the core values of America and say one cannot have access [to health care],” said the Rev. Daniel Robayo, rector of the city’s Emmanuel Episcopal Church. “It’s not about what we can afford. If we can afford billions for war, we can afford health care.”

Joining the pastor was Chris Nye, the health center’s chief executive officer; Dr. Beth Evans from the health center; and Jacqueline Miller, a Hinton resident and one of Evans’ patients who would qualify for health insurance if Medicaid is expanded.

The General Assembly is wrestling with that question: The Republican-led House of Delegates prefers reform to expansion because of the program’s growing costs, while Democrats in control of the Senate and executive office are in favor of growing Medicaid.

Medicaid serves low-income families with children, the disabled and others, and the federal government will pick up the full cost for the first three years that states expand under the Affordable Care Act, which is commonly referred to as Obamacare.

In the central Shenandoah Valley, coverage would be extended to about 11,000 people, including roughly 1,000 of the health center’s patients, Nye said.

That would possibly result in more services and a bigger building, which leads into one of Gov. Terry McAuliffe’s major pro-expansion points: It would create jobs.

“It absolutely would lead to more jobs and it would also lead us to be more competitive in the wage and salary marketplace,” Nye said. “We need to get the ideology out of the issue.”

On Monday, House Republicans announced a resolution that calls for an external audit of Virginia’s Medicaid system.

“Under no circumstances can you justify expanding a program growing at such an unsustainable level and filled with this much waste, fraud and abuse,” House Speaker Bill Howell said. “We are not going to rush the legislative process established by both chambers last year, simply for the sake of making a decision.”

But the audit would just move the issue “down the road,” Nye said, hurting people such as Miller, who on Tuesday shared a fear of never having a mammogram.

“When you can’t afford it, it’s very difficult to do,” said Miller, 46. “[Expansion] would benefit me greatly. … and I’m sure there are a lot of other mothers, women, people in my situation.”

One of the arguments for expansion mentioned was the higher costs all patients pay in emergency rooms as hospitals shift costs so they can treat the uninsured.

The Virginia Hospital and Healthcare Association, an advocacy group for state health providers, has lobbied state lawmakers for Medicaid expansion and calculated the financial losses for individual hospitals because of the Affordable Care Act.

When the act passed, federal Medicare reimbursements were cut and were to be offset through Medicaid expansion. Medicare provides insurance for people 65 and older and young people with disabilities.

However, after the Supreme Court ruled that Medicaid expansion was optional for states, nothing was left to offset Medicare losses, said Jim Andrews, the association’s vice president of financial policy.

“We’re still taking care of these uninsured patients,” he said.

For Sentara RMH Medical Center, the act’s impact has cost the hospital $5.3 million since 2010 and is growing each year, to reach an estimated $5.8 million in 2016 because of the loss in Medicare reimbursements, he said.

Mike Burris, vice president and chief financial officer for the Sentara Blue Ridge Region covering Harrisonburg and Charlottesville, said Sentara RMH has been preparing for the cuts for “some time” and has adjusted its budget accordingly.

“It’s not likely the patients will experience any difference in the quality of care,” he said.