Group Comes Up With Ways For Duke Energy To Address Coal Ash Spill Issues, Now Up For Public Review 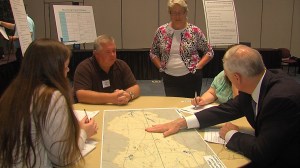 One of Virginia Organizing’s leaders, David Wilson, was featured in this story. To watch the full story at WSET, please click here.

Danville, VA– Thousands of tons of coal ash has settled in the bottom of Dan River, but questions and concerns are still rising about the spill.

One group has come up with ways to address the concerns and hopefully fix the issues. They’re called the Dan River Basin Community Stakeholder Team.

Over the past nine months, the group has digested all the issues and concerns voiced by the community, and has come up with 26 recommendations as ways to solve all these issues. Now, it’s up to the public to review them.

For Danville residents, the day 37,000 tons of coal ash gushed into the Dan River is unforgettable. The major outcry from the public, was to keep Duke Energy accountable. One way Duke says they’re staying accountable is by creating the Dan River Basin Stakeholder Team.

“That collaboration has really been critical in capturing that local voice as we move forward with potential restoration projects and our surveys along the river,” said Jeff Brooks, Duke Energy Spokesperson.

Danville resident, David Wilson is one of those local voices.

“One of the things that I am adamant about was showing me the money,” Wilson said. “The thing is, we don’t know the long term effects of what this coal ash is going to do.”

There are so many questions and concerns.  The stakeholder team has now consolidated them into possible solutions, and the public got to pick their top five most important.

“The projects that are listed here as part of this event will be the pool from which we’ll select ideas and projects that we’ll move forward with in the community,” Brooks said.

Residents were clear in what they think should be addressed immediately. They wanted Duke to prevent future coal ash spills, create a periodic report card on the state of the Dan River and improve access to the river.

“We all are affected by this, so we all should be taking an active role in knowing what’s going on,” Wilson said.

The Dan River Region Community Forum is a website where you can share questions, ideas and concerns about the spill.

The stakeholder team will be considering all feedback on the website until May 31. After that they’ll be voting on which solutions Duke Energy will work on implementing in the near future. Click HERE.