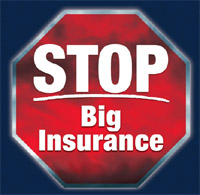 “The insurance companies are slamming families and businesses with unaffordable premiums and higher out-of-pocket costs,” said HCAN Executive Director Ethan Rome. “That’s why the insurers want to hide their efforts to use their customers’ premium dollars to undermine the consumer protections in the health care law. The insurance companies don’t want lawmakers or the public to know about their efforts to promote anti-consumer legislation and to roll back the ACA’s consumer protections.”

Insurance companies are members of a trade group, America’s Health Insurance Plans (AHIP), that in 2009 secretly contributed at least $86 millionfor ads by third parties to oppose health care reform. The money was laundered through the U.S. Chamber of Commerce, which aired attack ads for months.

The insurers have resisted disclosure of political spending that would permit consumers and shareholders to understand their hidden role in the political process. The health insurance industry’s money-laundering scheme helped the Republicans win control of the U.S. House of Representatives in 2010, and the insurers continue to bankroll the Republicans’ effort to buy Congress to advance their interests.

Here are the actions taken by HCAN partners and allies at shareholder meetings in the last week:

UnitedHealth, Las Vegas, May 23: Members and supporters of the Progressive Leadership Alliance of Nevada gathered outside the meeting at a company facility. Consumer proxy-holders were turned away by the company. Media access to the event was shut down, and UnitedHealth security refused to admit television crews at the gate. Reporters who tried to listen to the meeting via webcast, as is customary practice, were unable to access the program. The company promised to make a recording of the meeting available but still has not done so “due to technical difficulties.”

Aetna, Philadelphia, May 20: The protest was planned by the Health Care For America Now coalition and carried out by HCAN coalition members Action United, Philadelphia Unemployment Project, and Penn ACTION, and it focused on Aetna’s hypocrisy. As Aetna’s Executive Staff and Board of Directors fled the room, Action United member Alicia Dorsey took the floor and said, “We are here because for years Aetna has said it supports health care reform. Yet during that time, it has been funneling millions of dollars of secret contributions to the Chamber of Commerce, which ran ads against the ACA and members of Congress that supported it.” After the meeting, Marc Stier, Executive Director of Penn ACTION and Pennsylvania HCAN director, said the ads were deceptive. The protesters unfurled a golden parachute while denouncing the $76 million in stock proceeds and compensation collected from Aetna by recently retired CEO Ronald Williams.Philadelphia police detained three of the protesters for about 30 minutes before releasing them without charge.

Coventry Health Care, Tysons Corner, Va., May 19: Activists from Virginia Organizing, Health Care for America Now, Northern Virginia Labor Federation and the Virginia AFL-CIO were on hand inside and outside the shareholder meeting. Several consumer shareholders, including Paula Neustatter of Fredericksburg, held proxies to attend the meeting and speak in support of a shareholder proposal to disclose future monetary and non-monetary political contributions used to influence elections. Despite having the proper credentials, Virginia Organizing members Neustatter and Joe Katz were blocked by Coventry staff from speaking. When Neustatter attempted to speak during the comment period on a shareholder resolution calling for greater transparency in the company’s political donations, a Coventry employee took away the microphone.

WellPoint, Indianapolis, May 17: Shareholder Karen Green Stone, an Indiana health care activist, asked CEO Angela Braly why she was paid $13.4 million from rising customer premiums last year – equivalent to the salaries of 285 school teachers. “Braly, standing at a podium next to a digital clock meant to keep shareholder questions to less than two minutes, defended WellPoint’s compensation as in line with other companies, and vetted by the board, consultants and now the shareholders,” the Indianapolis Business Journal reported. “‘We consider it important to have competitive [pay] arrangements for the CEO and the named executive officers,’ she said.” Hoosiers for a Commonsense Plan held a rally nearby that included National Nurses United and the California Nurses Association.