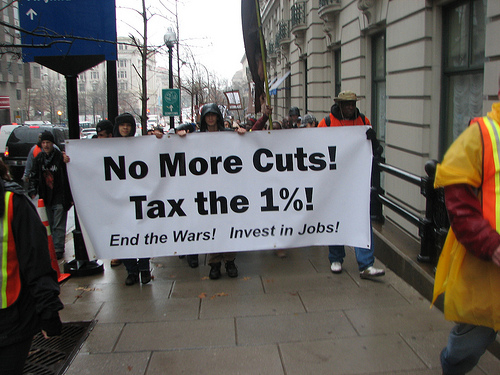 Protesters from across the country held a speak-out and rally today, calling for Congress to focus on creating jobs rather than proposing health care cuts that harm patients and eliminate jobs from our weak economy. The event was part of a week of actions in support of the “Take Back the Capitol” initiative. On Tuesday, underemployed workers and jobless people joined full-time health care workers in visiting members of Congress. The delegations demanded job security and no cuts to Medicaid and Medicare. Cutting spending on the nation’s two main health care programs would result in immediate job losses in most states.

Nikki Brown-Booker, who has had a disability her entire life, traveled all the way from Berkeley, Calif., to recount how Medicaid has helped her personally while providing the opportunity for employment to others. Because of Medi-Cal, California’s Medicaid program, she can hire home attendants to provide services she needs to remain independent and productive at home.

“Thanks to Medicaid, I was able to move out of my parents’ house when I was 18, go to college, get a master’s degree and become a productive, taxpaying member of the community – all while creating opportunities for others to also work,” said Brown-Booker, a marriage and family therapist who works with parents and children who have disabilities.

The health care sector is the nation’s biggest job creator, generating 20 percent of the country’s new employment this year and accounting for 1 out of every 8 American jobs. Repeated proposals to slash health care programs like Medicaid and Medicare would cripple this engine for job growth and economic recovery and threaten the well-being of countless seniors, children, people with disabilities and working families.

Speakers joined hundreds of workers in a march to K Street, where protesters confronted corporate CEOs and lobbyists for some of the country’s largest companies, which have avoided paying their fair share of taxes for years. These executives have managed to remain part of the country’s wealthiest 1% while the other 99% continue to struggle in the face of constant threats to their health care and their livelihoods.