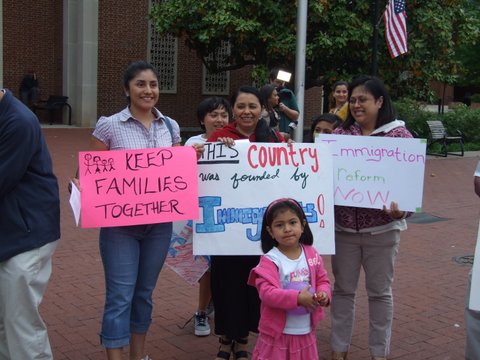 (05/21/13) RICHMOND, Va. – As a U.S. Senate committee prepares to vote this week on a sweeping immigration reform bill, advocates for children say it contains critical provisions for protecting and helping immigrant youth. It includes a pathway to citizenship, and other provisions to keep families together.

According to Wendy Cervantes, vice president, immigration and child rights policy, First Focus Campaign for Children, one of the most important provisions would keep families from being torn apart, and give parents who are detained or deported more of a say in what happens to their kids.

"And what's happening to those children is that they're either going back to their parents to a country they may have never known, or they're staying behind here with family members or friends," she stated.

Cervantes said about 5000 children are in foster care in the U.S. because their parents have been detained or deported.

The proposed Senate bill would make it much harder to terminate parental rights because of immigration status. The legislation also provides a pathway to citizenship for 11 million immigrants who are in the U.S. illegally, including about 210,000 immigrants in Virginia.

Cervantes said the Senate bill eliminates federal restrictions to make it easier for states such as Virginia to offer in-state tuition to unauthorized immigrant children who've graduated from high schools in the state.

"It wouldn't require Virginia to provide in-state tuition for undocumented children in their state, but it would at least give them the ability to make that decision on their own without any penalty from the federal government," she said.

If the legislation passes the Senate Judiciary Committee this week, a full Senate vote is expected in June.

A link to the Senate immigration reform bill and amendments is at Judiciary.Senate.Gov.

Click here to view this story on the Public News Service RSS site and access an audio version of this and other stories: http://www.publicnewsservice.org/index.php?/content/article/32530-1