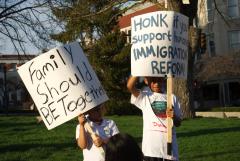 “This land is your land; this land is my land,” they sang, led by an acoustic guitar and audio speaker­-supported singers stationed on top of the courthouse steps.

The group had gathered to join their voices in support of comprehensive im­migration reform, in particular a path to citizenship for undocumented immi­grants already living in the U.S.

Isabel Castillo, a Harrisonburg res­ident and undocumented immigrant, said the rally was part of a larger network of protests.

The festive group, which wrapped halfway around the Harrisonburg­Rockingham Judicial Center, marched from Court Square, down Liberty Street and then up Main Street on the way to U.S. Rep. Bob Goodlatte’s Ma­son Street office.

According to The Associated Press, thousands gathered throughout the country Wednesday in coordinated demonstrations pressing Congress to approve immigration measures granting 11 million immigrants living in the U.S. illegally a path toward citizenship.

And those gathered in the city said they sought just that, a path, not a gift.

“We want to be full members of society,” Castillo said. “We’re not saying we immediately want citizenship.”

One group in particular that demonstrators supported was the “dreamers,” those brought to the United States illegally as children, but who grew up here and were educated in U.S. schools.

“Every year, outstanding undocumented students graduate from Harrisonburg High School where I teach,” Sandy Mercer said to the crowd from the courthouse steps.

Mercer said that it grieves her to see these students unable to attend secondary schools or acquire skilled jobs because they lack a Social Security number.

“No matter how hard they work or study, they must live in the shadows,” she added.

The “dreamers” gained their name from the DREAM Act — legislation that Congress debated in 2010 but didn’t pass. The legislation would have granted legal status to these young undocumented immigrants who met certain criteria.

Demonstrations were held in at least 18 states, the AP reported, and in Washington, D.C., a large crowd gathered on the U.S. Capitol’s west lawn.

Groups opposed to illegal immigration say they aren’t worried that lawmakers or voters will be swayed by emotional messages, and argue that extending legal rights to immigrants living illegally in the U.S. will create financial problems for cashstarved governments and spur more illegal immigration.

“There ought to be a rally for the 20 million Americans who can’t find a full-time job,” NumbersUSA President Roy Beck, whose group advocates reductions in immigration levels, said in a statement Wednesday.

Many of those who gathered in Harrisonburg expressed that they, their friends or family live with fear of deportation.

“Even though we are still part of society, the reality is that our lives are at risk,” Castillo said, explaining that she could be taken right from the courthouse steps.

“The people live in fear; families live in fear,” said Adela See, who works frequently with undocumented immigrants as a community outreach worker for the Rockingham-Harrisonburg branch of the Virginia Department of Health.

See came to Harrisonburg legally about 30 years ago after meeting her now husband in her native Guatemala.

And one heavy fear, expressed by placards held high as the mass took its show on the road and marched down Liberty Street, is of families being separated.

See said that sometimes one family member will be deported but others are allowed to stay, and children who were born in the United States — U.S. citizens — sometimes must leave because their parents are forced out.

Goodlatte, R-Roanoke, is chairman of the House Judiciary Committee. He said last month at a naturalization ceremony in Harrisonburg that reform would not likely include a direct path to citizenship for undocumented immigrants. He and other conservative Republicans perceive the path without punishment as analogous with amnesty.

Demonstrators said they want Goodlatte to support comprehensive immigration reform and a path to citizenship, something Eric Thomason, a deboning manager for Pilgrim’s Pride said he supports.

“We’re a country of immigrants pretty much,” said Thomason, who says he is half Italian and half Cherokee. “It’s going to be a long road. It’s not going to happen overnight.”

Senators writing a sweeping immigration bill have said they hope to finish the draft this week.

The proposal will open up a nationwide debate on measures, including border security, guest workers and a path to citizenship for the millions of undocumented immigrants.

The Associated Press reported that a source familiar with proposed legislation said the bill will require greatly expanded surveillance of the U.S.-Mexico border and greatly increased detention of border crossers in high-risk areas.

— The Associated Press contributed to the report.