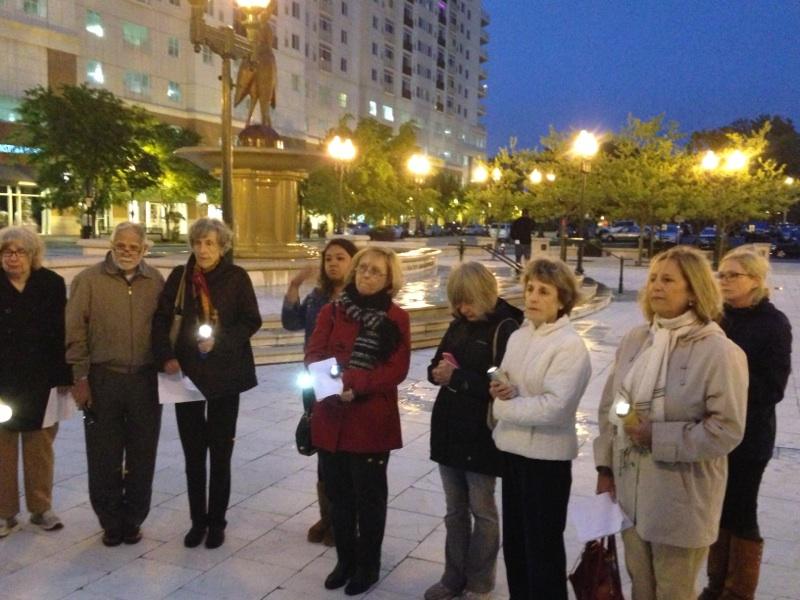 Standing in the wind and cold Wednesday night, Cindy Barrera told her story to a small crowd of strangers who came with flashlights to listen.

“My mom is undocumented,” began Barrera, a sophomore at Old Dominion University.

She told the strangers about her mother’s arrival from Guatemala decades ago, about how she’s cleaned houses nearly every day since, and about how, when her own mom was dying thousands of miles away, she couldn’t go home to say goodbye. If she had, there would have been no coming back.

“It was very hard seeing her go through that pain,” Barrera said, beginning to cry.

The group, gathered at Town Center, was there to advocate for immigration reform. Only about two dozen people showed up, and only stayed about half an hour. But they vowed to increase their numbers and keep coming back until legislation is passed to change an immigration system that they regard as broken.

“We need a solution that works for families,” said Alicia Fernandez-Bobulinski, a volunteer with Virginia Organizing, a Richmond-based nonprofit that put the event together. “After so long, this is our window of opportunity.”

Virginia Organizing spread word of the gathering through the Internet, telling participants to come with flashlights as a symbolic display of their effort to “light the way” to reform. They also asked people to come with stories about how the existing system has affected their lives. One other woman besides Barrera spoke.

Groups around the country held similar gatherings and rallies Wednesday.

Historically dedicated to labor rights, May 1 in recent years has become a day of action for immigration-reform advocates.

Virginia Organizing wants to see legislation that would help reunite families and provide a clearer path to citizenship, said Fernandez-Bobulinski, a naturalized U.S. citizen who lives in Virginia Beach.

While she said the group is hopeful that Congress has the momentum to deliver, it plans to hold Town Center gatherings on the first of each month until reforms are passed.

“This is just the beginning,” she said. “We want people to see that there’s a community behind this.”