Immigration reform in the real world 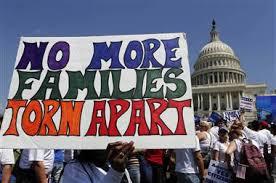 The House of Representatives, however, appears determined to block that effort and dash those hopes. House Speaker John Boehner announced he wouldn’t bring the bill to the floor for a vote unless he knew a majority of his fellow Republicans supported the bill. They don’t.

Instead, too many seem to cling to a view that demands an outcome – mass deportation – that nearly everyone recognizes is unrealistic. Others, including Virginia’s Rep. Bob Goodlatte, the Republican chairman of the House Judiciary Committee, have insisted that no solution include a pathway to American citizenship for an estimated 11 million immigrants here illegally.

The pathway included in the measure is cumbersome, and reasonably so, given that substantial hurdles must be in place to demonstrate respect for the current law.

Those hurdles include undergoing a criminal background check, paying about $2,000 in fines and any back taxes, learning English and waiting a decade for a green card and an additional three years for citizenship. But failing to include a pathway to citizenship in any comprehensive plan would mean failing to adequately address the consequence of the existing system. That component must remain.

The measure that passed the Senate last week includes enforcement efforts that opponents of illegal immigration have demanded for years: extending a border fence between the U.S. and Mexico hundreds of miles, hiring more border patrol agents and requiring businesses to confirm the legal status of employees and job applicants through the federal E-Verify system.

But the measure also aims to boost the number of visas for high- and lower-skilled workers and provide for more immigrant farmworkers through a temporary guest-worker program – all part of a broader plan to help bolster the nation’s economy.

That strong bipartisan bloc recognizes that failing to resolve the status of an underclass of millions of people is detrimental to the social and economic fabric of this country, and they’ve wrapped that concession around a series of efforts designed to prevent the current scenario from occurring again.

It isn’t perfect, but it’s an improvement over what’s in place today. More importantly, it’s based in reality, which is more than can be said of anything that has passed the House.