Inside The Fast-Cash World Of Virginia Car-Title Lenders 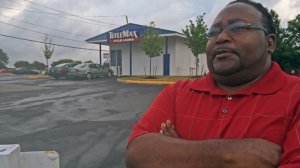 Photo credit: Michael Pope/WAMU Outside the TitleMax where he borrowed a total of $2,600. Waverly — he asked us not to use his last name — ended up paying $5,515.

Listen to the full story at WAMU (click here).

You may have heard their jingles on the radio or seen their commercials that play endlessly on late-night TV. Perhaps you have driven by one of the many storefront operations that cluster around military bases or poor neighborhoods. They are car-title lenders, offering easy money for those willing to hand over the title to their automobiles.

No job? No credit? No problem.

Virginia is one of 21 states where businesses can offer high-interest loans to those willing to hand over the title to their cars. That means residents from D.C. and Maryland flock to Northern Virginia — lured by the promise of quick cash. But many fall into a debt trap.

Critics of the industry say these businesses are predatory, taking advantage of people who need to the rent or who are facing medical bills. Those who defend the industry say they are following Virginia law, which allows them to offer loans that have interest rates of up to 264 percent in some cases, unlimited interest rates in other cases. To find out more about the industry and how it works, WAMU tracked down several people who say they have been victimized by a business they say is nothing more than loan sharking.

Like all the victims WAMU talked to as part of the Debt Trap series, Waverly asked that we not use his last name because of the stigma associated with car-title lending. He agreed to meet in the parking lot of the TitleMax in on Broad Street in Richmond where he took out two loans several years ago, putting himself into a debt trap he feared he wouldn’t be able to get out of. Like many people, he learned about TitleMax by seeing one of the many television commercials that flood the airwaves offering the promise of quick cash. 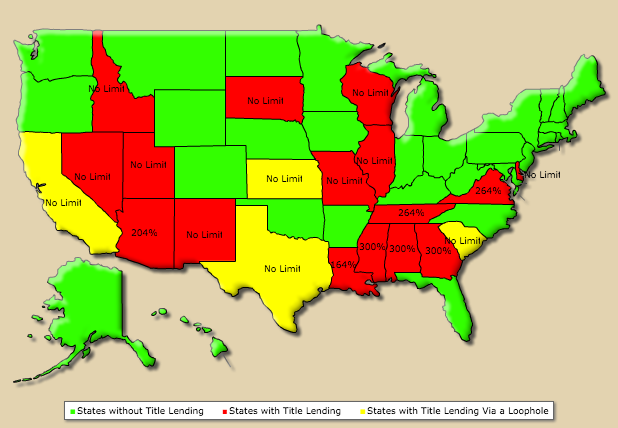 “They make it sound so easy to get a loan,” says Waverly, a mental-health technician. “You know, to come in and not having to go through the hoops so to speak of getting a traditional loan so you know I decided to stop by to see one day when I didn’t have any other options.”

Like many people who take out title loans, Waverly found himself in hard times. He fell and hit his shoulder, which brought an onslaught of medical bills he was not able to pay. Desperate for a way out, he saw the TitleMax commercial and decided to visit this Broad Street location to find out more. By the time he walked out, he had handed over the title to his 2000 Toyota Avalon in exchange for $600.

“I probably needed originally more than what I asked for,” he says. “But you’re just trying to rob Peter to pay Paul so to speak when you are underwater, and you don’t have a lifeboat so to speak. So that was my life boat just to keep me afloat for a while.”

One day when Waverly came back to make a monthly payment, the folks at TitleMax made him an offer that seemed too good to be true. They said that he had qualified for even more money. For Waverly, who was now facing mounting financial difficulties because of medical bills, this was welcome news.

“I was offered additional money being that I was in good standing or something,” he says. “But it wasn’t explained that it was like a consumer finance loan, which later I found out that’s what I was in.”

Before I can ask Waverly to explain what the difference between a car-title loan and a consumer-finance loan, we are interrupted. A man from TitleMax walks out of the building and confronts us in the parking lot.

I told the man who I was and why I was there holding a WAMU microphone interviewing Waverly.

“OK. Well you are going to have to do it somewhere else,” he says. “You can’t do it here.”

I ask for his name.

“Don’t worry. I’m not giving you my name, but you need to leave the premises,” he says.

TitleMax doesn’t like press. Although they have an email account specifically set up to handle media inquires, messages sent to the address are rebuffed with a curt reply.

“We appreciate you reaching out to us,” wrote Jamie Lane, director of corporate communications. “However, we are declining to comment at this time. As a matter of policy, we do not respond to inquiries from the media.” 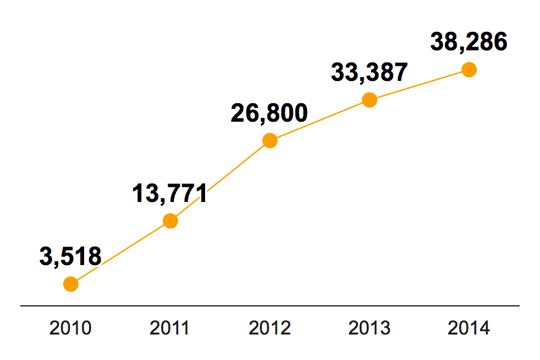 Each year since 2010, there has been an increase in the total number of individual borrowers who failed to make a monthly payment for at least 60 days on a motor vehicle title loan issued in Virginia. Source: Virginia State Corporation Commission

Waverly and I move to the parking lot of an adjacent strip mall, where he tells me the rest of the story. He says they wanted to give him an additional $2,000. So he came to the TitleMax and signed new paperwork. But this time the loan was not for a car-title loan at all. It was for a consumer-finance loan, a completely different kind of loan with fewer protections to consumers.

For example, the loans can be extended for much longer. And the interest is unlimited. In addition to that, state regulators are not tracking how many automobiles are repossessed under these loans. Waverly says he signed the paperwork, although he didn’t learn until much later what a mess he was getting himself into.

“I was manipulated,” he says. “And so that’s why I was very upset about it and figured I couldn’t get out of it,” Waverly says.

What happened to Waverly shows the latest trend in car-title lending, as companies in Virginia increasingly move into the shadowy world of consumer-finance loans. Recent years have seen a dramatic rise in the number of these loans. Documents from the State Corporation Commission show that the number of these loans tripled from 2013 to 2014, rising from about 3,000 to about 9,000. While that’s a small fraction of the 155,000 car-title loans that were made in 2014, it represents a sizable portion of the money. Car-title loans offered about $163 million in 2014, and consumer finance loans that use car titles as collateral offered about $34 million.

“Some people come out of these shops with products that are not car-title loans that have even worse interest rates that have longer payment terms,” says Del. Scott Surovell (D-44), whose district has become of hotspot for these businesses. “These kinds of predatory tactics, these kinds of bait-and-switch tactics need to stop. And I hope to pass legislation next year to deal with that.”

Surovell wants to introduce legislation that would force the businesses to offer one kind of loan or another, not both. That would mean a place like TitleMax could have a car-title lending license or a consumer-finance license. But it would not be able to hold both licenses for the same location. Surovell faces opposition, though.

“It’s not predatory,” says Senate Democratic Leader Dick Saslaw, who has taken about $37,000 from TitleMax in the last decade. He says if people like Waverly didn’t have access to businesses like TitleMax, they would find other ways to get the money.

“Well they borrow it on the street,” he says. “Borrow $100 on Monday, pay back $200 on Friday, 10,000 percent APR. That’s where they were borrowing money. And if they didn’t pay it back they got the hell beat out of them and they still had to pay it back.”

Diane Standaert at the Center for Responsible Lending says she’s seen no evidence of a black market for loans. But she says she has seen plenty of evidence that car-title loans are bad news. A 2013 report from the Center for Responsible Lending shows more than 7,000 car-title lenders operate in 21 states, costing borrowers about $3.6 billion each year in interest on $1.6 billion in loans.

“The typical car-title loan is refinanced eight times,” says Standaert. “This typically means that the loan was not affordable to the borrower, and in fact repeat reborrowing is the core of the car-title business model.”

That’s a business model that means easy money for the lender, hard times for the borrower.

“Twenty five percent of these loans are now seriously in default,” says Jay Speer at the Virginia Poverty Law Center. “That tells you that these loans are not affordable, and that if you are thinking about getting a loan like this, the likelihood that you are going to default is very high and the likelihood that you are going to have your car repossessed is very high.” 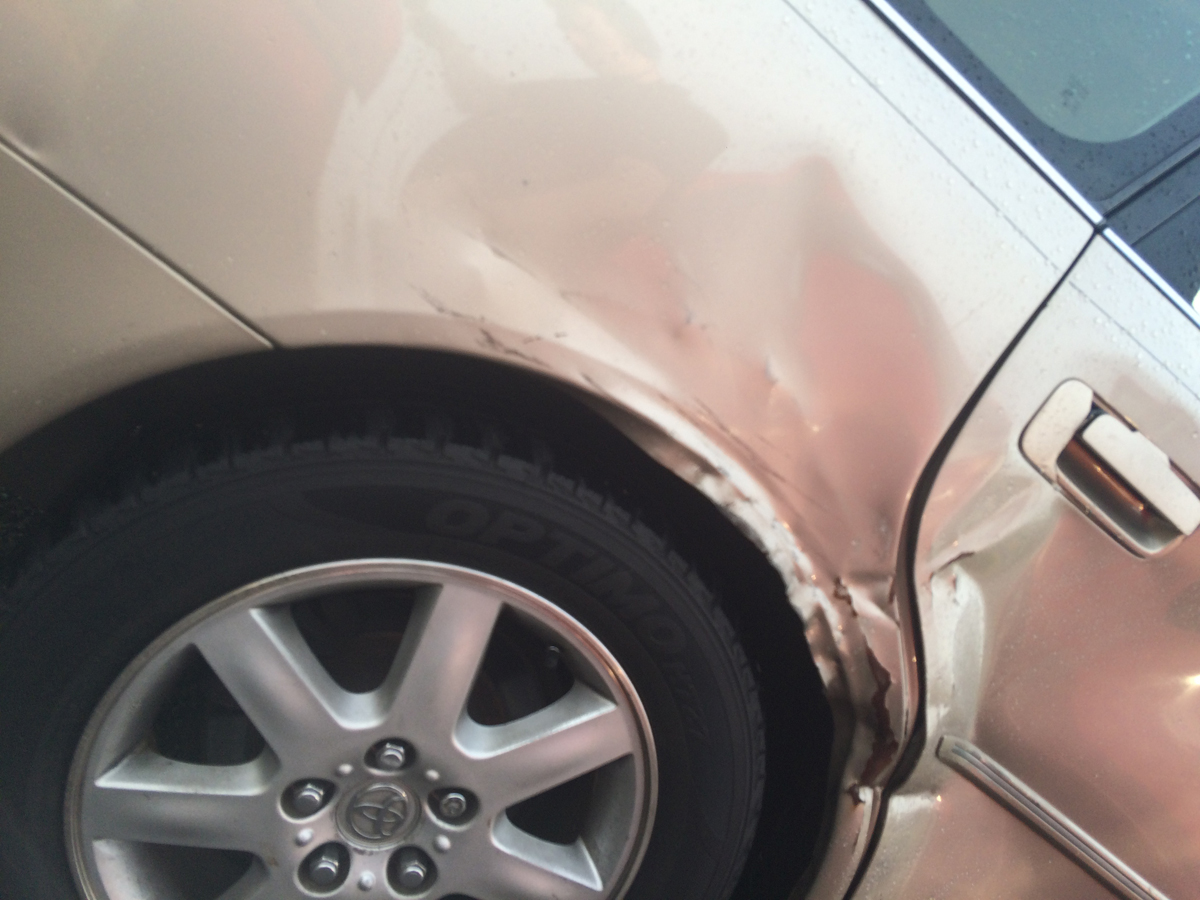 Waverly’s car was hit, giving him a windfall insurance payment that allowed him to pay off the debt. (Michael Pope/WAMU)

Fortunately for Waverly, he had help paying off his debt. He got into a car accident, and the insurance company offered him enough money to pay the loan off. Although the car is damaged, it’s still drivable.

“This was my mother’s vehicle before she passed away,” he say. “I inherited it. So I was already upset about that. So I just look at it as a blessing from her. She probably was just trying to get me out of the loan. That’s just how I look at it. Really.”

Others aren’t so lucky. And now, some are pushing state and federal regulators to crack down on the industry, which many say is nothing more than loan sharking. Others say the businesses are operating within existing law and people like Waverly know what they are getting into.