Home » The Issues » Climate/Environment » Inside the Minds of Dominion Leaders, Vacant Space Where Climate Thinking Should Be

Inside the Minds of Dominion Leaders, Vacant Space Where Climate Thinking Should Be 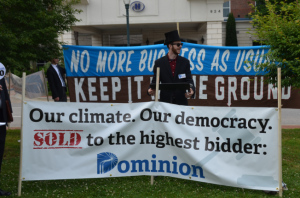 Published by Power for the People VA

At Dominion Resources’ annual May meeting, shareholders presented five resolutions designed to improve the company’s assessment of its opportunities and vulnerabilities on climate, renewable energy and nuclear power. The company’s Board opposed the resolutions and fought vigorously to keep them off the shareholder ballot. (All five failed.) Guest blogger Seth Heald attended the meeting and sent this report back.

Two senior Dominion Resources executives—Bob Blue and Thomas F. Farrell, II—gave speeches on consecutive days earlier this month. I’ll report here on what they said, but even more telling is what they failed to say. Neither man mentioned a critical topic for their company and our world: climate change.

In Arthur Conan Doyle’s short story Silver Blaze, Sherlock Holmes solves the kidnapping of a racehorse by focusing on what didn’t happen. A dog didn’t bark in the night when the crime was committed, suggesting that the perpetrator was friendly with the dog. As The New Yorker’s Maria Konnikova, author of How to Think Like Sherlock Holmes, describes Holmes’s insight: “pay attention to what isn’t there, not just what is. Absence is just as important and just as telling as presence.”

Here’s the context of the two Dominion speeches. Bob Blue, president of Dominion Resources’ Dominion Virginia Power (DVP) subsidiary, was the luncheon speaker on May 10 before several hundred people in Richmond at the Virginia Chamber of Commerce conference on “Energy, Sustainability & Resiliency.” Tom Farrell, Dominion Resources’ board chairman, president, and CEO, spoke the following day in Columbia, SC, addressing a small audience—many of them Dominion employees and board members—at Dominion Resources’ 107th annual shareholders meeting. (Dominion always draws smaller audiences, and smaller climate protests, when it holds its shareholder meeting away from its Richmond headquarters.) As best I can tell, Bob Blue and I were the only two people present at both events. I took detailed notes.

DVP is Virginia’s largest electric utility. Thanks to its fossil-fuel-fired power plants it’s also the commonwealth’s number one emitter of climate-disrupting carbon dioxide. It’s hard for serious people to think about “energy, sustainability, and resiliency” these days without thinking about how climate change is and will be affecting us and our children. The past year has certainly been filled with near-constant reminders of climate change for anyone paying attention. These include Pope Francis’s encyclical, record warm global-average temperatures, the Paris international climate accord, severe droughts, and severe floods.

So it seems reasonable to expect Blue might have expressed some thoughts on how the climate crisis will be affecting his company and the electric-power industry in the coming decades. It was, after all, a conference on energy, sustainability, and resiliency.

Blue said at the outset that “natural gas is the new default fuel” for electric-power generation. He mentioned his company’s new gas-fired power plants and said, “We expect the big things we build to last 50 years or more.” He alluded to the hits Dominion has taken recently on its environmental record by saying the company had done a lot of things well, “but our weakness is our inability to communicate in simple terms about complex matters.” (Translation: We’re doing everything just right, but folks don’t realize it because they can’t understand complex matters.)

If climate change is a subject Blue has given any thought to lately, he neglected to mention it. To be fair, he did briefly mention the EPA Clean Power Plan, saying he thinks it would cost Virginia between $5 billion and $13 billion. But then he claimed it was too complex and boring to go into in detail. And he also talked a bit about solar and wind power, but there was no reference at all to the underlying climate problem that is the primary reason we need to transition from fossil fuels.

What’s more, Blue brought up solar and wind mostly to justify DVP’s go-slow approach in deploying them. Speaking a few days after the Kentucky Derby, in what he called “Triple Crown season,” Blue said that with solar and wind power, “The earliest horse out of the gate doesn’t always win.” That’s true in horse racing (although sometimes the first horse out does win), but it’s a poor analogy to use when addressing climate change, where greater CO2 emissions today necessitate much sharper reductions later. Thinking about climate change means recognizing the need for early action.

Come to think of it, the horse-out-of-the-gate analogy is more apt for building gas-fired power plants than it is for deploying clean energy. There’s no need to rush to build multiple fossil-fuel plants when we know we have to kick our fossil-fuel habit. In fact, there’s a high likelihood that a rush to build huge new fossil-fuel infrastructure now will leave ratepayers on the hook later, paying for power plants that have to be shut down early for us to reach our future carbon-emission targets. Yet Dominion has certainly been moving with great speed lately to get gas-fired power plants built. There is a sense of urgency at Dominion, but it’s about building more fossil-fuel infrastructure, not addressing climate change.

By not mentioning or acknowledging climate change Blue accomplished at least two objectives that he must think serve his company’s short-term interests. First, he avoided offending the many Republicans in the room, including some state legislators, whose party still cannot bring itself to acknowledge the climate threat. Blue’s climate silence is understandable in that regard, although it hardly reflects moral courage or true business leadership. Problems ignored as unpleasant or “controversial” tend to get worse, not better.

Second, by not mentioning climate change Blue could avoid having to explain how Dominion’s business plan will affect the climate, or Virginia’s ability to transition from fossil fuels to carbon-free energy in time to help our country avoid catastrophic climate impacts. Stated another way, ignoring climate change allowed Blue to ignore the need to compare his company’s greenhouse-gas-emissions trajectory with what the science tells us must be done to retain a recognizable climate.

Climate silence is a topic of considerable interest to scholars these days. In fact, on the day after Blue’s speech The Washington Post ran an article describing a recent study of climate silence by two Penn State researchers. In his new book Moral Disengagement, renowned Stanford psychologist Albert Bandura explains, “If one ignores … the evidence of the harmful results of one’s conduct, one has few reasons to activate self-censure or any need to change behavioral practices.”

This may help to explain Blue’s silence. When your business model doesn’t square with your conscience, you may prefer not to activate your conscience.

Bandura’s insights also illuminate the lacuna where climate thinking should be in the mind of the Dominion Resources CEO. Farrell’s speech to shareholders in Columbia a day after Blue’s talk was preceded by a short video intended to show Dominion’s good works in South Carolina. I’ve attended the last four Dominion shareholder meetings (two in Richmond, one in Cleveland, and this one in Columbia). The videos about the company’s local charitable and civic involvement are a staple at each meeting, and they’re always well-produced, moving, and interesting.

This year’s video highlighted contributions (financial, in-kind, and services) that Dominion and its employees made to the Red Cross and others in South Carolina last fall, when the state suffered from catastrophic flooding. A news clip in the video from the time of the floods showed an emotional Governor Nikki Haley saying, “This is the heaviest flooding we’ve ever seen.” Another person could be heard saying, “Eastover [SC] lost everything.” Columbia’s mayor said the floods “changed our lives.” A number of scenes of devastation were shown.

Dominion’s employees clearly did great work in helping a stricken region recover, and the company’s donations to the Red Cross are certainly admirable. But there was a sad irony in employing that tragic event to highlight Dominion’s many good works. Did any of the assembled Dominion executives or board members think about climate change as the video rolled? Did they think about the wisdom of their company’s plans to build massive new fossil-fuel infrastructure? Certainly Farrell did not mention climate in his prepared remarks following the video.

When company executives rarely talk publicly about climate change it’s easier for them and their audiences and employees not to think about it. Executives’ public silence on the issue also makes it easier for the legislators with whom executives regularly interact not to think about climate. And if you don’t think about a problem much, you’re unlikely to gain a sense of urgency about having to address it. That’s Albert Bandura’s moral-disengagement theory in a nutshell.

Dominion’s public silence on climate is complemented by its support for the American Legislative Exchange Council (ALEC), which promotes climate-change disinformation to state legislators. That further promotes inaction on climate. A corporation’s use of front groups to do the corporation’s dirty work behind the scenes is another example of moral disengagement, according to Bandura.

Farrell started his talk by listing what he said are Dominion’s four core values: “safety, ethics, excellence, and one Dominion.” There’s a large and growing body of scholarly research on climate-change ethics, including a number of recent excellent books on the topic suitable for lay readers. But Farrell’s discussion of ethics had no references to the climate. A shareholder resolution on the Dominion proxy ballot this year called on the company to have at least one board member with environmental expertise. Such expertise might include familiarity with the field of climate ethics. But Dominion’s board recommended a “no” vote on the resolution, and it was defeated.

Farrell claimed that Dominion is a leader in environmental stewardship. “We’re a leader, but people don’t recognize it.” He discussed the company’s major expansion in the natural-gas transmission business in recent years, and said the Marcellus shale-gas formation in the East “will provide gas for the balance of this century at least.” He noted the company’s pending acquisition of Utah-based gas company Questar, which will allow the company to expand its gas business across the West.

Farrell took questions from shareholders after his talk. I asked him for his thoughts about climate change, after noting that we’d been through a year of record global temperatures, floods, and the Paris climate accord. He said he didn’t want to talk about the Paris agreement. “I’ll leave that to President Obama and Secretary Kerry. That’s above my pay grade.” Farrell’s pay package last year topped $20 million.

Seth Heald is a student in the Johns Hopkins University Master of Science in Energy Policy and Climate program. His article on climate communication and moral disengagement is published in the May-June 2016 issue of the journal Environment, Science and Policy for Sustainable Development. He serves as volunteer chair of the Sierra Club’s Virginia Chapter.