Home » The Issues » Immigration Reform » Loverde and DiLorenzo: Who is my neighbor?

Loverde and DiLorenzo: Who is my neighbor? 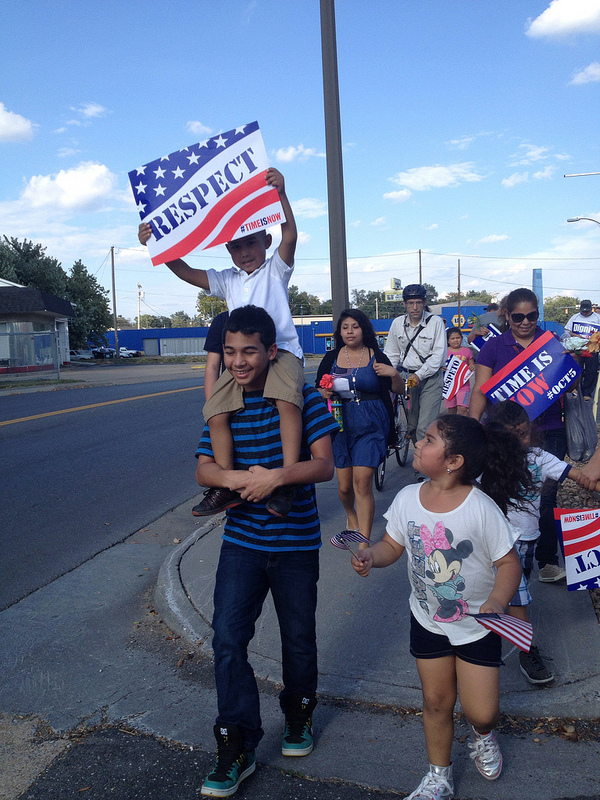 As Congress works to resolve the nation’s budget crisis, it must also focus on another pressing issue. Our legislators have the opportunity to confront and reform our country’s broken immigration system. How is the system broken? Unlike the model that welcomed our parents, grandparents or great-grandparents to these shores in the last century or before, current policy does not adequately or realistically address the need for visas. Living in this comparatively prosperous, peaceful nation, many Americans seem unaware of the desperate situations that lead people to enter or remain in the country illegally. Around the globe, people yearn for better lives, a chance to escape poverty, jobs to feed their families, reunion with their kin or life in a country free of war. As it always has, America symbolizes the hope of a better life.

Many regard the undocumented immigrants among us as lawbreakers, when instead we are all challenged to embrace them as fellow children of God, deserving of the same dignity that we ourselves enjoy.

The current system is unjust in many ways. For example, it allows only 5,000 employee-sponsored visas for low-skilled workers annually, a number that cannot keep pace with the demand for labor. For individuals seeking to reunite with their families, the waiting lists can be punishing: Family-based visas can prolong separation for sometimes 10 or more years. We are especially concerned about the effect these unjust laws have on such families. The family is the fundamental unit of society. Any law that does not protect and promote the family — but instead weakens and destroys it — must be reformed.

The fact is, immigrants have always been part of the fabric of America. We write as bishops whose own families immigrated to this country from Italy. We live in a commonwealth settled by immigrants from Europe, and now populated by people from every corner of the globe. As they always have, immigrants sit among us in our pews and our classrooms. We see them ahead of us in the grocery line, or behind us at traffic lights. Many of those we interact with every day, including our co-workers and employees, are immigrants. They live in our neighborhoods and pay taxes in our communities.

They are our neighbors; some 768,000 newcomers to this country live in Virginia. While many have become nationalized citizens or live here as legal residents, approximately 210,000 newcomers live here without proper documentation. Consequently, many undocumented immigrants live in fear: of being deported; of being separated from their children and families; of being forced to return to their homelands and the desperate circumstances that necessitated their migration.

Thus, socially isolated and vulnerable to exploitation, these strangers among us are more likely to work for an unjust wage, less likely to become involved in their communities, or more reluctant to report crimes because they fear their immigration status will be detected.

Immigration reform will strengthen Virginia socially and economically. Immigrants, both documented and undocumented, contribute to our economy by purchasing goods and services and increasing state revenues through sales and income taxes. Undocumented workers pay between $145 million and $174 million to the commonwealth annually through state income, property and sales taxes.

While it is easy to extol the economic benefits of providing a path to citizenship for the millions of undocumented immigrants living in this country — approximately 11 million — the economic argument cannot be the foundation of reform. Immigration reform should be done because it is the right thing to do.

Together with our brother Catholic bishops throughout the country, we seek immigration reform measures that provide an earned path to citizenship; maintain the family as the cornerstone of our immigration system; restore due process to immigration enforcement policies; provide paths for low-skilled workers to enter the U.S.; and address the root causes of migration. We believe this can be accomplished while ensuring appropriate levels of border security and with proper respect for the rule of law.

From the colonists of Jamestown to Irish and Italian coal miners to Burundi refugees, Virginia has always provided a home for those seeking a better life and the freedom to practice their religious faith. When we deny a means of legalization to millions of undocumented persons currently living in the United States, we are forgetting our past and denying our future. Now is the time to pass just and compassionate immigration reform.