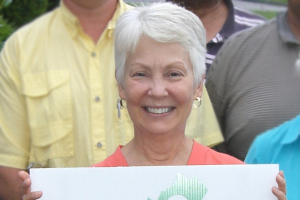 Since 2008, Martha Woody has been a strong member of Virginia Organizing. After participating in a series of meetings with legislators around predatory lending, health care, and more during the 2008 General Assembly session, Martha became active in establishing the Martinsville/Henry County Chapter in 2011. A retired mental health clinician, Martha believes in the way Virginia Organizing works for change.

“I’m proud of the way we partner with like-minded organizations to address community issues,” said Martha. “This May, our Chapter worked with OneVirginia2021 to get a resolution in support of non-partisan redistricting reform from Martinsville City Council.”

Martha has written letters to the editor, facilitated Chapter meetings, attended restoration of rights clinics, and recruited new members into the organization.

“I’m excited about the many opportunities we have to address issues of inequality and injustice. I think there will be a lot of opportunities for Virginia Organizing to have a tremendous impact in 2017 and beyond.

“One of the wonderful things about Virginia Organizing is that there are any number of issues to get excited about and get involved in and to make a difference on— restoration of rights, ban the box, school-to-prison pipeline,” said Martha. “To be able to make the difference on the local level, it helps to keep you hopeful.”

Thank you, Martha! Virginia Organizing wouldn’t be the same without you!