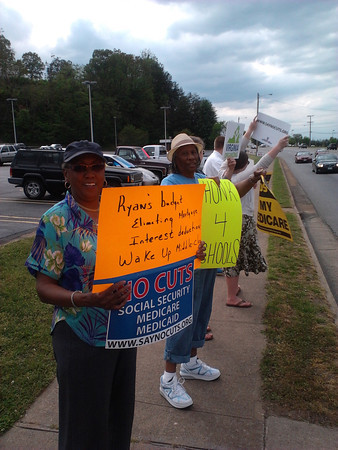 Martinsville, Va.— On Tuesday, April 17, a dozen members of the Martinsville chapter of Virginia Organizing rallied in front of the Workforce Center on Commonwealth Blvd. to denounce Congressman Robert Hurt’s support of the Ryan budget recently passed by the U.S. House of Representatives and call on Congressman Hurt to support passage of the “Buffett Rule.”

The budget plan privatizes Medicare, cuts funding for important social programs and cuts the number of employees who process Social Security claims. It would also cut taxes by about $4.3 trillion over the next 10 years, but people who make more than $200,000 a year will get the most tax breaks. The plan also slashes essential programs like food stamps and repeals the Affordable Care Act, eliminating tax credits for middle-class families to help them buy health insurance.

“As a former health care worker, I’m passionate about health care reform and was so excited when the Affordable Care Act passed,” said Betty Chew, a retired nurse and Virginia Organizing leader. “I know people who have benefited from the law—children with pre-existing conditions, young people now able to remain on their parents’ insurance and others.”

“The Ryan budget is not a good plan. It would end Medicare and hurt a lot of people,” said chapter leader Juanita Banks. “It protects the wealthy on the backs of poor people.”

Virginia Organizing aimed to remind Martinsville residents that people making $1 million or more a year often pay a lower tax rate than most middle-income families. The Buffett Rule would make it so that Americans who earn $1 million a year or more would be subject to a 30 percent tax rate.

“With Representative Hurt voting for this legislation,” said Chew, “it just makes me question his care for the poor and the elderly.”