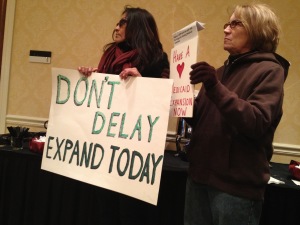 SIXTY YEARS after Virginia waged a campaign of “massive resistance” against integrating its public schools, the state is once again insisting on a policy that targets its least advantaged citizens.

Even as one Republican-led state after another moves to tap available federal funds for extending health coverage to needy citizens under Medicaid, Virginia stands pat. GOP governors in Indiana , Tennessee, Ohio, Pennsylvania, Arizona, Iowa, Arkansas and elsewhere have embraced the expansion, and it’s under consideration in conservative states such as Montana, Alaska, Idaho and Utah.

Yet Republicans in Richmond, standing on the “principle” that Virginians bear no responsibility for their least fortunate neighbors, will not budge.

The driving intellectual and political force behind Massive Resistance in the 1950s was then-Sen. Harry F. Byrd Sr., who regarded excluding blacks from educational opportunity as a great and principled cause. Today the political heirs of the Byrd Organization, mainly rural and exurban Republicans, are led by Del. William J. Howell (R-Stafford), speaker of the House of Delegates in Richmond.

It would cost Virginia not one nickel for the next two years to tap federal funds to extend Medicaid to hundreds of thousands of needy Virginians. After that, the federal government would pick up 90 percent of the expansion’s cost — an excellent deal for states that explains why so many Republican governors, like Mr. Pence, have embraced it. The Indiana governor drove a hard bargain, insisting that new Medicaid recipients pay monthly premiums and, for those who make unnecessary trips to the emergency room, copays.

“The core principles,” Mr. Pence told the Wall Street Journal last year, “are personal responsibility, having a set of incentives and consequences.”

Some Democrats and advocates for the poor fear that the imposition of premiums and other restrictive rules will deter too many people who need insurance from signing up. The Obama administration nonetheless took the deal, motivated by its determination to cover as many people as possible. The Indiana expansion is expected to draw billions of federal dollars to provide health coverage to 350,000 uninsured adults — about 7 percent of all Hoosiers age 18 or older.

Mr. Howell and his fellow Republicans say there is no guarantee the feds will make good on their promise to pay no less than 90 percent of the tab after two years. But Virginia could opt out if the 90 percent threshold were breached. By the Republicans’ argument, Virginia should not accept any of the $10 billion or so it receives annually in federal grants — a quarter of the state’s total revenue — for fear the funds might dry up someday.

In Virginia, expanding Medicaid would provide coverage to some 400,000 adults, whose uninsured status is a stain on one of the wealthier states. But Mr. Howell and his Republican allies have proposed no alternative to ensure that the state’s neediest people have access to decent health care. Their stance begins and ends with the word “no.”