Home » The Issues » Social Security » Mitchell: America shouldn’t be a country where livelihoods are bargained for.

Mitchell: America shouldn’t be a country where livelihoods are bargained for. 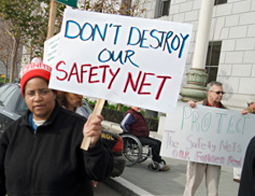 With the average cost of a college education today being somewhere between $20,000 and $40,000 per year, imagine putting four children through college by yourself.  Even for a middle class family this is a difficult task. Now add another aspect to that scenario. Your elderly father, who has worked for 40 years of his life, is no longer able to acquire his Social Security benefits. Suddenly you, a mother of four, must somehow find a way to make up for the now absent $10,000 that once helped your father survive with limited familial support. How on earth are you going to do it? Its situations like this that make me sit back and wonder: who’s interest are our politicians protecting?

Despite all of my efforts, I have not found a logical answer to these questions. As a young person who currently does not receive any Social Security, I can honestly say that I do not know what it is like to depend on Social Security for any part of my income when the cost of medicine, food and rent are steadily increasing.

I met a woman a few weeks ago in Spotsylvania, VA who survives on $900 a month. That’s $10,800 a year that she must utilize to pay for her rent, food, medicine and other expenses.  This woman, who has worked her entire life and paid into Social Security with the hope of having a stable retirement, barely scraps by. Not one, but both, of her children send her additional assistance each month despite their own financial troubles during this time of economic downturn. So what happens if her benefits are cut? How does someone who is already barely surviving, someone who is already depending on her children for assistance stay a float through such a change?

That’s just it, they don’t.

How can anyone even think of risking the livelihood of his or her friends, neighbors and families in such a way? The current propositions to cut benefits and raise the retirement age in an effort to “fix” a program that technically isn’t “broke,” are unfair, but more than this they are more detrimental than helpful. While it’s true that cutting benefits would allow for less money to be paid out in the program, it would also dramatically alter the lives of millions of already struggling Americans.

We must hold our representatives accountable for their actions, but we must also ensure that they are doing everything they possibly can to help rather than harm their constituents. To think of my new friend in Spotsylvania begging her already struggling children for more money just to survive is heartbreaking. America shouldn’t be a country where livelihoods are bargained for.

We must stand up for Social Security. It’s as simple as that.

Stephanie Mitchell is an intern with the Virginia Organizing Social Security summer program. This summer in the Fredericksburg area, you can find Stephanie giving daily presentations on the future of Social Security.