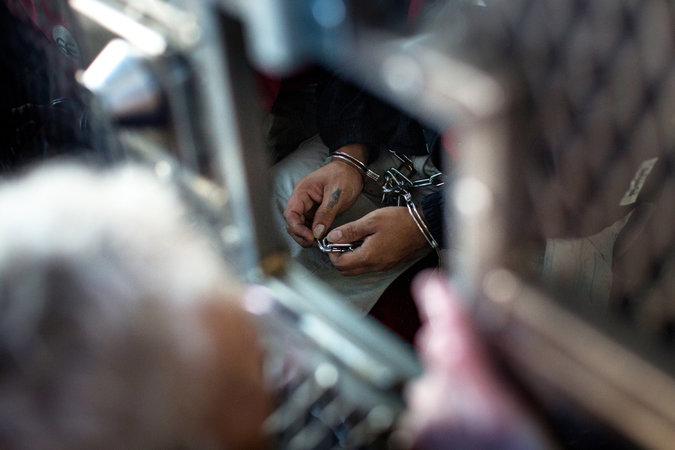 By Ginger Thompson and Sarah Cohen

With the Obama administration deporting illegal immigrants at a record pace, the president has said the government is going after “criminals, gang bangers, people who are hurting the community, not after students, not after folks who are here just because they’re trying to figure out how to feed their families.”

But a New York Times analysis of internal government records shows that since President Obama took office, two-thirds of the nearly two million deportation cases involve people who had committed minor infractions, including traffic violations, or had no criminal record at all.

Twenty percent — or about 394,000 — of the cases involved people convicted of serious crimes, including drug-related offenses, the records show.

Deportations have become one of the most contentious domestic issues of the Obama presidency, and an examination of the administration’s record shows how the disconnect evolved between the president’s stated goal of blunting what he called the harsh edge of immigration enforcement and the reality that has played out.

Mr. Obama came to office promising comprehensive immigration reform, but lacking sufficient support, the administration took steps it portrayed as narrowing the focus of enforcement efforts on serious criminals. Yet the records show that the enforcement net actually grew, picking up more and more immigrants with minor or no criminal records.

Interviews with current and former administration officials, as well as immigrant advocates, portray a president trying to keep his supporters in line even as he sought to show political opponents that he would be tough on people who had broken the law by entering the country illegally. As immigrant groups grew increasingly frustrated, the president held a succession of tense private meetings at the White House where he warned advocates that their public protests were weakening his hand, making it harder for him to cut a deal. At the same, his opponents in Congress insisted his enforcement efforts had not gone far enough.

Five years into his presidency, neither side is satisfied.

“It would have been better for the administration to state its enforcement intentions clearly and stand by them, rather than being willing to lean whichever way seemed politically expedient at any given moment,” said David Martin, the deputy general counsel at the Department of Homeland Security until December 2010. “They lost credibility on enforcement, despite all the deportations, while letting activists think they could always get another concession if they just blamed Obama. It was a pipe dream to think they could make everyone happy.”

Various studies of court records and anecdotal reports over the past few years have raised questions about who is being deported by immigration officials. The Times analysis is based on government data covering more than 3.2 million deportations over 10 years, obtained under the Freedom of Information Act, and provides a more detailed portrait of the deportations carried out under Mr. Obama.

The demographics of those being removed today are not all that different from those removed over the years. Most are Mexican men under the age of 35. But many of their circumstances have changed.

The records show the largest increases were in deportations involving [undocumented] immigrants whose most serious offense was listed as a traffic violation, including driving under the influence. Those cases more than quadrupled from 43,000 during the last five years of President George W.

A version of this article appears in print on April 7, 2014, on page A1 of the New York edition with the headline: More Deportations Follow Minor Crimes, Data Shows.