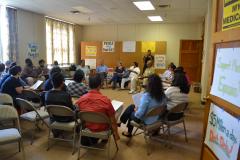 RICHMOND, Va. – West Virginia has passed Virginia for the percentage of citizens with health coverage, mostly thanks to Medicaid expansion.

For a long time, a higher proportion of the folks in wealthier Virginia had health insurance. Last year, West Virginia expanded Medicaid to cover the working poor. A new Gallup poll finds the rate of people without health coverage subsequently fell by a third. Virginia did not expand Medicaid.

Michael Cassidy, president of The Commonwealth Institute, said the poll found the number of Virginians without coverage increased slightly.

“West Virginia is now at 11.9 percent and we’re sitting at 13.4 percent,” he said, “despite the dramatic difference in the profile of our two states.”

Under the Affordable Care Act – Obamacare – states have the option to expand Medicaid. The federal government would cover the full cost for the first three years, then at least 90 percent after that. West Virginia took that option to cover people living up to almost 140 percent of the federal poverty level. Cassidy said that’s working well.

“West Virginia had one of the sharpest declines of all the states,” he said. “In Virginia, we’re facing a trend-line in completely the opposite direction.”

Opponents of expansion say they’re afraid the costs would explode, and the state would end up having to pay for it. But Cassidy said much of Virginia’s current budget shortfall comes from, as he puts it, leaving federal money on the table. He said Virginia could design expansion with a circuit breaker that could shrink the program if the federal support disappeared. Plus, he said, there are signs that the Affordable Care Act, with Medicaid expansion, is holding the line on health-care costs.

The Virginia General Assembly just finished a special session in which it again declined to expand Medicaid – despite the wishes of Gov. Terry McAuliffe.

Originally posted on September 29, 2014 by the Public News Service