US & VA Poverty Higher Than at Recession’s End 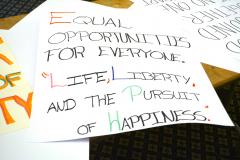 RICHMOND, Va. – More Virginians and Americans are in poverty now than at the end of the great recession, according to census figures. Debbie Weinstein, executive director with the Coalition on Human Needs, says the census shows more people living below the poverty line than when the recession officially ended in 2009. She says since the economy started growing again, the growth has been distributed unequally almost all going to the upper income.

“Here we are five years later, and actually poverty is higher in Virginia and higher nationwide,” says Weinstein. “An actual recovery, but just not reaching everyone.”

According to Weinstein, the national poverty rate has gone down slightly in the last year; she calls that glimmers of improvement but says in Virginia those figures have been basically stagnant.

About one-of-three Americans and one-of-four Virginians live below twice the federal poverty line. The data shows continuing weakness in wages, the amount of work available and in job security. Jim Schuyler, executive director with the Virginia Community Action Partnership, says the working poor are disproportionately minority, and he says growing up in poverty tends to limit the options for children. Schuyler says with the job market weak, many of those working families have struggled.

“Part-time or part-year workers who have not gotten back into the full-time workforce, and over a very long period of time has really drawn down any savings,” he says.

Continuing demand on social service agencies has spilled over to put a strain on private charities, and according to Schuyler, the gridlock and federal-budget cuts are also straining the safety net.

“It’s very unlikely Congress will pass a full-year appropriations bill for labor and health and human services again this year; that makes it almost impossible to plan,” he says.

Click here for the original article on the Public News Service, posted September 30, 2014.