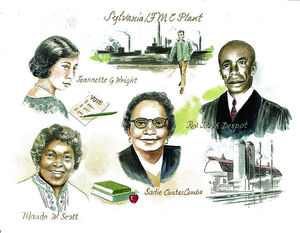 By Jeff Branscome, Published by The Free Lance-Star

Spotsylvania County has received just one $100 donation for a project that will add prominent people of color to a mural depicting the area’s history.

That means local taxpayer dollars will go toward the $3,000 project, which was initiated amid complaints that the existing mural in the Holbert Building’s boardroom lacks diversity.

The Board of Supervisors on Tuesday is scheduled to select six images for the mural expansion, which entails painting two 43- by 47-inch panels on either side of the existing piece.

Supervisor Gary Skinner has said he’d like to see a depiction of former School Board member Lee Broughton, the county’s first black elected official. Other recommendations include paintings of Joseph Despot, a minister and Spotsylvania native who was president of the Sunday School Union and an executive board member of the Mattaponi Association of Virginia; and Jeannette Garnett Wright, one of the first black women in Spotsylvania to register to vote, among others.

If the supervisors approve the images, county officials plan to award a contract to Stafford County artist Judi Wigglesworth, who offered to do the work for $2,500. It will cost another $500 to frame the piece.

Supervisors in December agreed to move forward with the mural, which is behind their dais. But before striking a deal with Wigglesworth, they asked county officials to solicit private donations and check whether any high schoolers would be interested in painting the mural.

County employees also say they have been in contact with the arts liaison for Spotsylvania schools, who forwarded information about the mural to visual arts teachers. But nobody in the school system has expressed interest in the project, officials say.

Asked why he thought the mural expansion deserved public funding, Supervisor Paul Trampe noted that the artwork is in an official government building.

“While artwork, per se, is not a government function, and I know of jurisdictions that have gone overboard, building virtual palaces, I don’t think small aesthetic touches in a government building are out of line,” he said in an email.

The mural was completed by the late Caroline County artist Sidney King in 1989 for $12,000.

More than two decades ago, the county added a small picture of John J. Wright—and the high school for black students that he founded—after residents complained that the painting didn’t recognize the achievements of black Spotsylvanians.

Then in 2013, Virginia Organizing, a grassroots group, and the Spotsylvania branch of the National Association for the Advancement of Colored People asked for $1,000 in local money to highlight other people of color in the meeting room.

Instead, the county formed a mural committee, which recommended early last year that six images be added to the piece.

Wigglesworth, the artist who hopes to complete the work, has painted other murals locally, including a fox-hunting scene by 18th-century artist Thomas Gainsborough.