My Daughter was in the School-to-Prison Pipeline 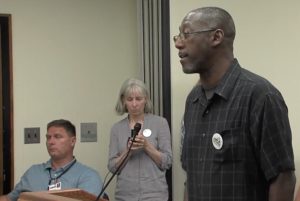 When my daughter’s 6th grade teacher called to tell me she had been caught looking at a cell phone in class, she had already given her an in-school suspension. The teacher said her behavior had been a problem for some time. I asked, “Why didn’t you let me know this was a problem earlier? I could have done something about it. Why are you only calling me now?” The teacher responded by saying, “Now I see where your daughter gets it from,” and hung up on me.

This is the school-to-prison pipeline. People of color and their children are treated disrespectfully in their own schools.

After my daughter’s teacher hung up on me, I walked to the school to speak with the Principal. He agreed that we would have a meeting, and eventually my daughter’s suspension was overturned, and she was moved to a different classroom.

Problems continued, however, because (as an administrator later said to me) they saw my daughter as a “trouble maker” from that day on. Teachers and administrators sometimes attempted to intimidate us. I refuse to be intimidated. I told my children to study the Student Handbook and know their rights.

That isn’t what I would like to be telling my kids, of course. What children need to know is that their teachers care about them. My daughter knew that her teachers did not. I wanted them to understand that–whether they knew it or not–my daughter wanted to have a positive relationship with them. She wanted to succeed and have their approval.

When parents entrust schools with their children that is also a relationship. The schools have a responsibility to treat parents and children with respect.

Whether or not a child passes a test, no good comes from humiliating the child or kicking them out of school. Children who are forced to go to alternative schools are more likely to drop out or get in trouble outside of school.

With my chapter of Virginia Organizing I have spoken with the Superintendent of the Lynchburg Schools and addressed the School Board. We want them to revise the Code of Conduct to reduce school suspensions in the same way the Portsmouth Schools did in response to the Portsmouth Chapter’s request. Right now, the zero tolerance language of the code is written so vaguely that individual teachers can choose who to target for harsh punishment if they wish. Children of color are disproportionately affected as a result.

Also, we want them to adopt a restorative justice model of discipline, along the lines of the Spotsylvania Schools memo of understanding to school resource officers. Governor Terry McAuliffe’s “Classrooms not Courtrooms” MOU was also modeled on what the Fredericksburg Chapter of Virginia Organizing accomplished in Spotsylvania.

Finally, I believe we need someone in every school who is there to advocate for children when the parents are unavailable. Many parents don’t realize that their children might be telling the truth when they say something wasn’t their fault. Some parents don’t feel qualified to intervene. But the children still deserve an advocate, someone who makes sure that administrators listen to a child’s side of the story, someone who takes the child’s needs into account.

Thank you for standing with us,