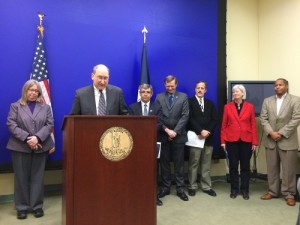 “I’m often forced to miss one committee meeting, depending on whose agenda is more important,” said Bell, R-Staunton.

Sometimes he’ll try to catch some of each hearing, climbing the stairs between the first and ninth floors of the General Assembly building, where the meetings are held.

“I’ve tried to get some adjustment, but I enjoy being on both,” Bell said.

He isn’t the only delegate with a sticky scheduling situation. Republican Delegates Mark Cole of Spotsylvania, Peter Farrell of Henrico and Brenda Pogge of James City County, as well as Democratic Delegate Mark Keam of Fairfax, also serve on both the House Education and House Finance committees.

Many citizens are put in the same position when they want to attend or speak at their legislative committee meetings.

This is one issue that a coalition of organizations for open government aims to address during the upcoming General Assembly session. The collaboration, called Transparency Virginia, outlined its goals at a press conference Tuesday.

Ben Greenberg, legislative coordinator of Virginia Organizing, a non-partisan grassroots group and member of Transparency Virginia, was concerned about overlapping committee meetings for legislators and citizens.

“I’ve personally had to actually inform legislators that a bill that they are concerned about is about to be heard in another committee, and I’ve seen those legislators rush from the first floor to the ninth floor to have an opportunity to speak on those committees and vote on those bills,” Greenberg said.

“This is a concern because it makes it almost impossible for a citizen to cover all the meetings they want to cover and participate in.”

Transparency Virginia aims to improve citizen participation and understanding of the General Assembly. Megan Rhyne, executive director of the Virginia Coalition for Open Government, said the group’s goals include the fair consideration of all legislation and advance notice of committee and subcommittee meetings.

“Citizens who want to testify on bills need lead time so they can plan child care or days off from work to travel to Richmond to do so,” Rhyne said. When committees and subcommittees call or cancel meetings quickly and with little notice, citizens are disadvantaged.

“It is impossible for citizens back home to monitor their representatives, when a bill’s history, as entered onto the Legislative Information System, simply states that it was tabled or passed by without any indication of who supported that decision and who did not,” Rhyne said.

“We are non-partisan, non-ideological, and we intend to be non-confrontational. We expect to work with legislators to make things better,” said Sterling, who thanked Delegates Sam Rasoul, D-Roanoke, and Jim LeMunyon, R-Chantilly, for their support and attendance at the press conference.

Sterling said the pressures of a short session and the abundance of legislation that committees must hear shouldn’t be an excuse to avoid the group’s suggestions.

“We think that nothing less than 100 percent compliance with fair procedure is what we should be aiming for,” Sterling said. “Our plan is to work with the leadership of both houses, we want people to know we’re here, we’re not there to find villains, or to point an accusing finger; we’re here to help point out problems that we think together we can solve.”

Delegate Bell is supportive of the group’s goals.

“We’ve got some work to do, but it needs to be done. Too much business is conducted out of the sunlight,” he said, adding that “a bipartisan effort has much better chance of success.”