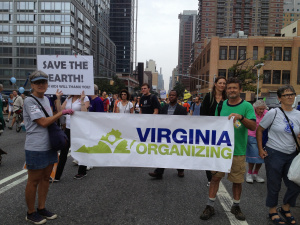 A solar array that would have more than doubled Virginia’s solar power will not be built after all, with the developer blaming Dominion Virginia Power and other utilities for their lack of interest in buying the output.

The Winchester Star reports that the 20-megawatt array-100,000 solar panels, capable of powering 20,000 homes-had been planned for 145 acres of agricultural land in Clarke County. A spokesman for the developer, OCI Solar Power, said the company allowed its land option to lapse “due to the lack of long-term solar procurement efforts by Dominion and other VA utilities.”

This shouldn’t surprise anyone. Virginia has done little to encourage our utilities to buy solar power, and so for the most part they haven’t. The state’s voluntary renewable energy goal is a sorry dishrag of a law. It can be-and is-met with old, out-of-state hydro plants, trash burning, and wood. And because our utilities have a state-sanctioned monopoly on power sales, customers who want solar power can’t go buy it from someone else.

But if it isn’t surprising for Virginia to lose a big solar opportunity due to utility intransigence, it is stupid. Virginia consumers would love to buy solar energy, local governments would love to have solar farms generating tax revenue, and local businesses would love to create solar jobs. A win-win-win opportunity is being wasted, at a time when lawmakers complain about how hard it is to reduce our carbon emissions.

Even Dominion says it wants utility-scale solar (eventually), but it wants to build its own so it can earn the fat return on equity guaranteed to it by Virginia law. (If the utility buys power from someone else, it can pass along the cost to customers, but it doesn’t earn a profit.)

Last year the General Assembly overwhelmingly passed a bill to support solar development, and then failed to fund it. Governor McAuliffe’s energy plan talks a good game on solar, but it’s toothless. We will continue to miss out on opportunities like this one until we have a law that requires Virginia utilities to buy solar, or lets consumers contract for it directly from any willing seller.

Or better yet, both.