Published by the Richmond Times-Dispatch. 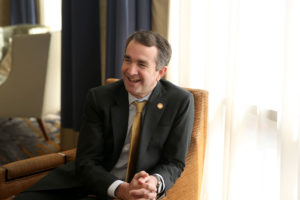 The Virginia Senate is about to reignite the public debate over Medicaid expansion, but Gov. Ralph Northam and House Republicans aren’t ready to play their cards on how to resolve the biggest issue facing the General Assembly in the next six weeks.

The Senate Education and Health Committee plans to hear presentations Thursday for three proposals to expand the state Medicaid program through legislation, which, if any of them pass, would promptly go to the Finance Committee as it grapples with the parting proposal by then-Gov. Terry McAuliffe to take more than $3.2 billion in federal money to expand health coverage in the two-year budget.

The committee also will hear an alternative approach by one of its members, Sen. Siobhan S. Dunnavant, R-Henrico, who proposes to expand an existing federal Medicaid waiver for a limited range of services while preparing for a “global waiver” to totally redesign the state program in the future.

“I expect this will be resolved as part of the budget,” said Jill A. Hanken, a health care attorney at the Virginia Poverty Law Center and leading advocate for expanding Medicaid eligibility for hundreds of thousands of uninsured Virginians.

Northam made clear again Wednesday that he wants a straight expansion of Medicaid under the Affordable Care Act that doesn’t rely on approval of a conditional waiver by the administration of President Donald Trump, who has failed repeatedly to repeal the health care law championed by his predecessor, President Barack Obama.

“We need to expand Medicaid in the most straightforward way we can,” the governor said in an interview with the Richmond Times-Dispatch.

However, Northam also said he intends to address ways to reform the state’s Medicaid program, including raising reimbursements for participating health care providers and helping able-bodied Virginians covered by the program to search for work and receive job training.

“I’d be glad to do anything I can to help train people for the workforce and enter the workforce, but I would not be in favor of a work requirement,” he said after speaking to the Virginia Chamber of Commerce at the Richmond Omni Hotel.

One of the pending Senate proposals, introduced by Senate Finance Co-Chairman Emmett Hanger, R-Augusta, would expand eligibility for the program immediately but also require the state to seek a federal waiver that would include a work requirement, a condition the Trump administration recently said it would allow in state Medicaid programs.

The two other proposals, by Sen. George Barker, D-Fairfax, and Sen. John Edwards, D-Roanoke, would simply expand the Medicaid program through an amendment to the state plan for services and eligibility under the program. Advocates support those bills, but not Hanger’s, because of the work requirement.

“We just want a straightforward expansion of Medicaid for the hundreds of thousands of Virginians currently without health coverage,” said Del McWhorter, chair of Virginia Organizing, an advocacy group.

Northam is not clear how he would package potential waiver requirements in a legislative deal to expand the program by Oct. 1. That’s the date the proposed $115 billion budget uses to begin accepting $3.2 billion in federal money under the Affordable Care Act to pay for no less than 90 percent of the cost of expanding coverage for an estimated 300,000 uninsured Virginians.

“I still think it’s a little bit premature to come with a definite plan,” he said.

House Republicans, who thwarted McAuliffe’s attempts to expand Medicaid four times, also aren’t ready to say how they intend to deal with a proposal that was a leading priority for voters in elections that slashed the GOP majority in the chamber from two-thirds to two votes.

However, Appropriations Chairman Chris Jones, R-Suffolk, made clear Wednesday that he doesn’t expect the decision to be made through legislative changes to the state code.

“The proper place for discussion is in the budget,” Jones said.

His position runs counter to the concern raised by the Virginia Hospital & Healthcare Association that any plan to use a new tax on hospital revenue to pay the state’s share of expansion should be codified through legislation, not just required through the budget, as McAuliffe proposed on Dec. 18.

“This is not our preferred approach,” association spokesman Julian Walker said Wednesday. “We still don’t really like the idea.”

In a letter to McAuliffe two years ago, the association laid out six conditions for supporting a “provider assessment,” which would tax net inpatient hospital revenues to pay the state’s share of expanding Medicaid eligibility to match federal money.

“Anything along those lines has to be at the absolute minimum necessary, but it has to be outside the budget and it has to be managed by the private sector,” Walker said.

In addition to legislation to expand Medicaid, Barker has proposed creating a Virginia health care access fund, which an independent authority would administer. It would impose a provider assessment that would pay for expanding health care coverage for the uninsured, support financially unstable rural hospitals, and help pay for graduate medical education.

The budget proposed by McAuliffe relies on a provider assessment to raise $306.9 million to pay the state’s share of Medicaid expansion and the lion’s share of the estimated $421.7 million in savings used to pay for a variety of other needs in the biennium. Those would include increasing a new cash revenue reserve to protect Virginia’s triple-A bond rating.

Northam said he supports the proposed budget, including the provider assessment, adding that as lieutenant governor during McAuliffe’s term, “I was part of the budget-writing process.”

However, he said, as a pediatric neurologist, he is mindful of the concerns raised by hospitals about how to pay for the care they deliver now to people who are either uninsured or under a Medicaid program that now reimburses hospitals for about 71 percent of their costs.

“As we talk about Medicaid expansion, I intend to address that issue,” Northam said.

Dunnavant, who is an obstetrician, also wants to address reimbursement by raising the rate to 80 percent as part of her proposal to create a “priority needs access program.” It would build on the federal waiver for the Governor’s Access Program that currently uses Medicaid to cover a limited range of services for people with serious mental illness, addiction and substance use disorders.

“If you get pneumonia, you have to seek help in the same safety net,” she said Wednesday. “My plan doesn’t expand for that.”

Dunnavant wants to expand eligibility for services under the waiver for anyone earning from 100 percent to 138 percent of the federal poverty level, but only for treatment of mental illness, substance use disorder or “life threatening of complex chronic medical condition.”

Her proposal would rely on a 50/50 match of federal and state funds, with the state’s share covered by a provider assessment, rather than the minimum 90 percent federal share for expanding the program under the Affordable Care Act.

Dunnavant sees the proposal as one part of a broader array of changes to shore up private insurance purchased by individuals who often can’t afford to use it because of high deductibles and copayments, while transforming the way Virginia funds its public programs to improve health care outcomes and control costs.

“You just can’t throw money at it and expand Medicaid, and think we’re going to make it better,” she said.