Published by Danville Register and Bee.

Danville resident and cancer survivor Margaret Lipford said she started paying into the system more than 30 years ago.

For decades, she worked at Dan River Mills, putting part of her salary into Social Security, Medicare and other federal entitlement programs.

Bad news arrived just as the mill was close to shutting down in 2006 — Lipford was diagnosed with lung cancer. After a surgery removed part of her lung, her doctor told her she would never be able to work again.

Now 60, Lipford is on disability, making her one of the more than 400,000 Virginia residents who fall into the Medicaid coverage gap — people who are ineligible for the public health coverage but cannot afford quality health insurance or medical expenses.

She wants that to change.

A state Senate panel voted down efforts to expand Medicaid through legislation earlier this week in an 8-7 party line vote. State budget negotiations are now the sole way for Medicaid expansion to pass the General Assembly.

‘We didn’t choose to become ill’ 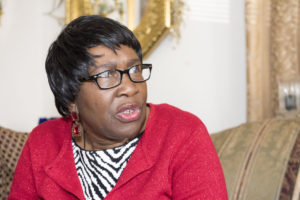 The outside of Lipford’s Danville home is dotted with cheerful decorations, including some outdoor lights shaped like happy cartoon frogs.

Inside, among her comfy couches, portraits of loved ones and decorative candles, Lipford displays the medicines she must take each month. They include chemotherapy drugs, allergy medications and blood pressure pills, among others.

Because of mounting medical expenses, Lipford said she must pick and choose what doctor visits to attend, placing her most dire ailments first.

“I know I gotta go,” Lipford said about going to her cancer check-ups or visits to manage her low blood pressure, rather than seeking long-term treatment for her allergies.

Additionally, because she only can qualify for health insurance plan through her disability benefits, she still has to pay for part of costly cancer procedures, leaving her with thousands of dollars in medical bills.

“We didn’t choose to become ill, or have chronic illnesses,” Lipford said.

Since 2014, the choice of whether to accept federal funding for Medicaid has been solely the responsibility of the Virginia General Assembly. Despite protests from then-Gov. Terry McAuliffe, Republican lawmakers defeated efforts to expand coverage every year.

With a larger Democratic presence in the House of Delegates thanks to a November wave election, Gov. Ralph Northam is again attempting to expand Medicaid.

“The proposal currently before us will create tens of thousands of new jobs, save the commonwealth more than $400 million over the biennium, reduce the strain on rural hospitals and help combat our mental health and addiction crises,” Northam said in a speech to the General Assembly earlier this month. “As a physician, I believe that expanding Medicaid is a matter of basic economic justice.”

In an interview last week, Del. Les Adams, R-Chatham, expressed his reluctance to support any Medicaid expansion efforts. He added that he believed action might still be taken in the U.S. Congress to repeal or replace the Affordable Care Act, referencing a U.S. Senate effort in 2017.

“I think it would probably be wise to see where we’re going to be before those issues are addressed,” Adams said.

Local and state Republican lawmakers have used similar arguments in the past to explain voting against Medicaid expansion.

Lipford, who became interested in the issue after becoming a member of the Virginia Organizing advocacy group, said she stays positive about both her medical issues and the chances of Medicaid expansion. She said regular exercise and her personal faith have brought her a long way.

“I’m not going to let my situation depress me or make me down, or be negative about it,” Lipford said.

She added, however, that she was frustrated with the way some viewed those on welfare programs as lazy or reliant on them.

“They want a hand up, not a hand out,” Lipford explained. “I would just like someone to consider this group.”

“I hope our legislators would have some compassion toward Medicaid expansion,” Lipford said.