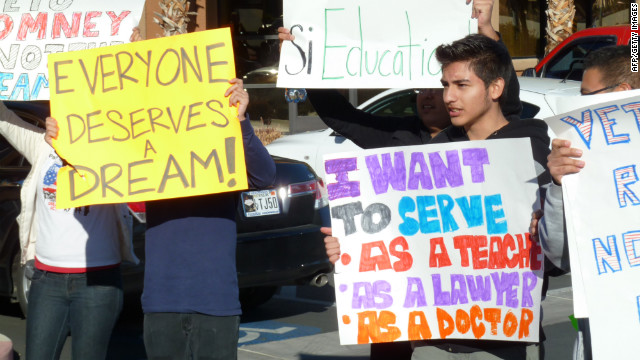 Washington (CNN) — In an election-year policy change, the Obama administration said Friday it will stop deporting young [undocumented] immigrants who entered the United States as children if they meet certain requirements.

The shift on the politically volatile issue of immigration policy prompted immediate praise from Latino leaders who have criticized Congress and the White House for inaction, while Republicans reacted with outrage that the move amounts to amnesty — a negative buzz word among conservatives.

Those who might benefit from the change expressed joy and relief. Pedro Ramirez, a student who has campaigned for such a move, said he was "definitely speechless," then added: "It's great news."

"It makes no sense to expel talented young people who are for all intents and purposes, Americans," Obama said.

"The notion that in some ways we would treat them as expendable makes no sense. If there is a young person here who has grown up here and wants to contribute to this society, wants to maybe start a business that will create jobs for other folks who are looking for work, that's the right thing to do," he said.

Under the new policy, people younger than 30 who came to the United States before the age of 16, pose no criminal or security threat, and were successful students or served in the military can get a two-year deferral from deportation, Homeland Security Secretary Janet Napolitano said.

It also will allow those meeting the requirements to apply for work permits, Napolitano said, adding that participants must be in the United States now and be able to prove they have been living in the country continuously for at least five years.

The change is part of a department effort to target resources at [undocumented] immigrants who pose a greater threat, such as criminals and those trying to enter the country now, Napolitano said. It "is not immunity, it is not amnesty," she told reporters, adding the shift is "well within the framework of existing laws" and "is simply the right thing to do."

Read the full story at the link above.