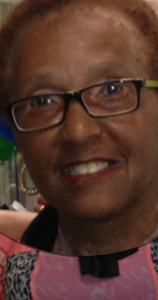 Gayle Bracy grew up in Baltimore, Maryland and attended school in Ohio and Maryland.  She graduated from the University of Maryland School of Business Administration. She joined the Air Force and completed her tour of service.  She was hired by the Department of Defense as a civilian, working in Italy and Germany and landing finally at Fort Belvoir in Northern Virginia.  The daily commute did not leave much room for volunteering or helping others. She often promised herself, during her commuting days, that once she retired she would give some of her time to community service.

Now that she’s retired, she’s become one of Virginia Organizing’s hardest working leaders. She chose us because every issue the Fredericksburg Chapter was working on spoke to her. They were the issues that she cared most about: affordable housing and the school-to-prison pipeline, especially. “Helping families, the homeless, the elderly,” she says, “every one of those issues improved somebody’s life.”

Since she joined she’s also noticed the diverse membership of Virginia Organizing. She attended the Grassroots Gathering in Wakefield this year and was happy to see that the statewide group is just as diverse as her own chapter, which is not something she sees in many other organizations.

Gayle contributes to the work of the chapter in many ways. She works with the group to complete strategy papers, researches strategy for creating affordable housing, develops briefings, and writes letters to the editor. She attends forums, rallies, meetings, and board presentations. “Politicians all know we have an ‘issue,’” she notices, “but they don’t see that we have a looming crisis.”

Gayle’s career often involved long commutes to work in places she couldn’t afford to live. She knows how much that costs a family, and she wants to see change. She wants to see more people get involved, too. “We all could help each other if we would just decide to help the next person.”

Thank you for your service, Gayle! Thanks for all the gifts you bring to Virginia Organizing.