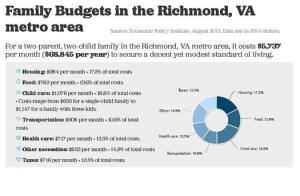 RICHMOND, Va. – A typical working family in Virginia probably doesn’t make enough money to support itself, according to a new online budget-cruncher.

The Economic Policy Institute’s Family Budget Calculator takes local data on a variety of costs, including food, housing and medical expenses. Enter a U.S. ZIP Code or location and it crunches the numbers for different-sized households.

Laura Goren, senior policy analyst with The Commonwealth Institute for Fiscal Analysis, looked at the results for the state. She says what the calculator shows is many Virginia families fighting a big gap between what they make and what they need to get by.

“After adjusting for inflation, wages for the typical Virginia worker have not increased in a decade,” says Goren. “The typical worker cannot on their wages alone support a family.”

Goren says statewide, wages average about $19 an hour. She says the budget calculator shows, for instance, that is only about two-thirds of what it takes for a family to live in Hampton Roads, and isn’t even enough for a family to make it in the lowest-cost parts of the state.

“For someone working full-time, year-round, that’s just $38,000 a year,” she says. “Thirty-eight thousand dollars a year is not nearly enough to support a family, in any part of Virginia.”

Goren believes Virginia should take such steps as expanding Medicaid to cover the working poor, as well as raising the minimum wage and making good child care easier to get. Critics say those steps would cost employers and taxpayers too much; Goren counters that in the end, they will make the entire economy grow.

“Paying workers enough to make ends meet, making sure everyone has access to quality, dependable child care – so parents who need to work can do so – and closing the coverage gap, so working adults can afford to see a doctor, helps everyone,” she says.

The budget calculator is easy to use and available to anyone on the Economic Policy Institute website.