Home » The Issues » Health Care » “Our Health Care is Under Attack, What Do We Do? Stand Up, Fight Back.”

“Our Health Care is Under Attack, What Do We Do? Stand Up, Fight Back.” 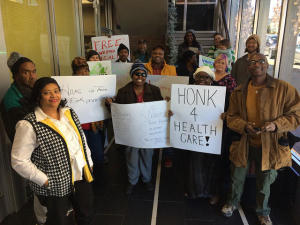 Listen to the audio of this story at WVTF Radio

Word that the Affordable Care Act is under attack has its supporters in Virginia planning a series of protests around the state.  Robbie Harris reports that the one in Danville December 21st was as much a ‘thank you’ march as it was a protest against repealing the health care law.

About 20 protesters chanted their support of keeping the Affordable Care Act, also known as Obama Care.

They started on Main Street Danville in front of the community health center, which has been serving many newly insured people. Then they headed for U.S. Senator Tim Kaine’s office to deliver a thank you note to him for his strong support of preserving the health care law.

Marcher, Matt Bailey is a hospice nurse. He says he sees the importance of the ACA in his work, helping people at the end of their lives.  As for his own family, he and his wife have recently been able to afford health insurance for the first time in several years because of the affordable care act.

Bailey says,  “We found peace in that, peace of mind — and we’ve been concerned about whether we’re going to lose that coverage or not.”

The group, Virginia Organizing, is planning to hold several marches around Virginia in support of the Affordable Care Act before the new Congress convenes January 3rd.