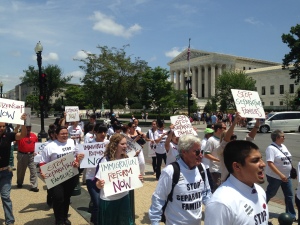 Published in The Virginian-Pilot on November 22, 2014

I have been in the United States for 16 years. When the president gave relief to millions of young people like me through the Deferred Action for Childhood Arrivals program, I was thrilled. Since that time, I’ve been able to benefit from in-state tuition opportunities so I can work to further my education and give back to the nation that has given me so much opportunity.

Not only did I receive relief through DACA, but now, because of President Barack Obama’s most recent announcement, my family members also will receive some relief. I’m thrilled that my relatives and members of my community will be able to get driver’s licenses and work permits and stop living in the shadows that we’ve all grown accustomed to — shadows that keep our families together while we worry about who will be deported. Today, because of the president’s announcement, I know that my family will be together for the holidays.

Our movement has been clear from the beginning that we want real reform. We want the system changed so that immigrants and native-born U.S. citizens are working together for better wages, working conditions and labor protections. We want an opportunity for the millions of undocumented immigrants living and working in the U.S. to earn citizenship. We want an opportunity for those who have lived here, been educated here, work here and have set up their lives here to remain in their homes and communities — and with their families.

In order to accomplish these goals, we need real reform. Americans need Congress to come together and work to fix our broken immigration system. We have a bipartisan bill that has passed the U.S. Senate, but Speaker of the U.S. House of Representatives John Boehner and other members of the House leadership continue to refuse to even consider the bill.

As a nation, we cannot expect real change to happen without people working together across party lines. The Senate bill was a compromise. It included protections for workers, a clear path to citizenship, protections of civil rights and measures to help families be together. But that bill also included increased border security and more enforcement. No one got everything they wanted, but everyone got something. That’s what compromise is all about.

There are major costs to inaction on immigration reform and continuing to live under our current broken system. The biggest cost is to the families of those torn apart by these policies. When a loved one is deported, it is devastating to a family. There are economic costs, too: The Congressional Budget Office estimated that the Senate comprehensive immigration reform bill would reduce the deficit by $135 billion in the first 10 years, create millions of new jobs and boost the economy. As a Virginian who has seen the toll of slow economic recovery, I believe we should be doing what we can to ensure the financial health of our country.

The bottom line is that we need real, comprehensive reform. Relief is wonderful, and I am so happy for the millions of people in my community who are celebrating with their families. But relief does not fix the underlying systemic problem. We need Congress to act for the good of our nation. Immigration reform with a path to citizenship is a policy that is good for people, families, businesses and our country.

The time for action is now. Congress needs to take the lead now and make sure that comprehensive reform with a path to citizenship is a priority.

Linda Peña is a student and resident of Virginia Beach. She works with Virginia Organizing, a nonpartisan grassroots organization, to work for immigration reform.