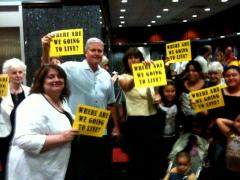 Chesapeake, VA – On Tuesday evening, the Chesapeake City Council will make the final decision on the Providence (Highland Glens) re-zoning application, which if approved, would potentially displace 170 families in order to build condos. Prior to the vote, residents of the Providence Mobile Home Park along with many supporters will gather at 6:00pm on the steps of City Hall in Chesapeake to have a vigil and reflection on the seven month long struggle to stay in their homes. The Virginia Organizing Project and other groups have been assisting local residents to keep their homes or to find viable alternatives.

Tuesday night’s City Council decision is the culmination of months of organizing and two recent victories for the mobile home residents. On May 12, the Chesapeake Planning Council unanimously voted to reject the re-zoning application that would displace 170 low-income households. On May 23, the City Council unanimously voted yes to move a mobile home park protective policy forward to be included in the comprehensive plan. Despite these victories, residents say that the owner of the property has threatened those who speak out at the City Council meeting, or to the media, with immediate eviction.

Tuesday’s vote is the final step in ensuring that the Providence Mobile Park residents are not put out of their homes with no alternative. Despite the intimidation, residents still plan on speaking out. Providence mobile home residents will ask City Council to uphold the recent recommendation of the Planning Commission and deny this re-zoning application.

Where: On the front steps of City Hall, 306 Cedar Road, Chesapeake, Virginia 23322.
Visuals: Residents will carry yellow balloons and yellow “Where Will We Live?” Signs

Chesapeake Residents Vow to Fight Bulldozing of Their Homes