Public Programs Lift Millions of Women and Children Out of Poverty 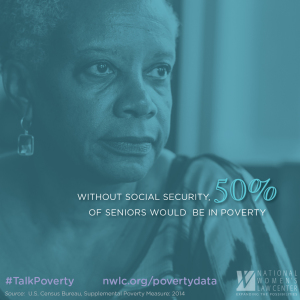 Some members of Congress are putting public programs that are vital to women and families on the chopping block—despite evidence showing that these programs lift millions of Americans out of poverty each year. With poverty levels as high as they are, we can’t afford to let Congress cut these effective programs that provide assistance to so many low-income families.

However, these Census data do not give a full picture of the effectiveness of public programs in lifting people out of poverty. The official poverty measure doesn’t count as income non-cash programs like Supplemental Nutrition Assistance Program (SNAP, formerly Food Stamps) and housing assistance, or refundable tax credits like the Earned Income Tax Credit (EITC) that raised the incomes of millions of people enough to bring their families above the official poverty line.

2. The Earned Income Tax Credit (EITC), which helps low- and moderate-income working families, lifted the incomes of more than 5.6 million people above the poverty line:

3. SNAP lifted the incomes of more than 3.6 million people above the poverty line:

4. Housing subsidies lifted the incomes of more than 2.8 million people above the poverty line:

While these programs are making a real difference in people’s lives, these data show there is still much more work to be done to ensure that families are economically secure. High poverty rates, especially for single mothers, women and children of color, elderly single women, and women with disabilities mean safety net programs are essential. Programs like SNAP, Social Security, and tax credits for low-income families all help lift women and their children out of poverty and must be protected. However, if Congress doesn’t act to end the sequester, many already under-funded programs will face further cuts. As Congress continues budget negotiations this Fall, legislators must keep in mind what the data confirm—investing in programs that help low-income families and children works. As we continue to work to ensure that everyone has a way out of poverty, these programs must be strengthened, not cut.