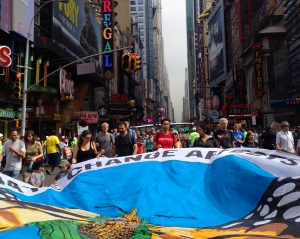 This blog originally appeared in The Huffington Post on October 16, 2015.

More than seven in 10 Americans now believe in climate change, up from just over half in 2010, according to a multi-year survey by the University of Michigan. This new perspective coincides with an ethical shift that is driving change in the way we produce and consume energy worldwide.

Religious leaders are calling for action, including Pope Francis who recently said a “cultural revolution” is needed to care for the planet and its people and for fossil fuels to be “progressively replaced.”

Last year, half a million protesters gathered in cities around the world for the People’s Climate March, the largest environmental rally in history. This global action brought together diverse groups sharing a common belief: “We must change how we produce and use energy to preserve our future.”

This is today’s “energy ethic,” an ideal enabled by affordable clean energy. And it is unstoppable. As Victor Hugo once said, “You can resist an invading army; you cannot resist an idea whose time has come.”

The movement has extended to the capital markets, where steps to divest from fossil fuels are now common. Hundreds of financial, educational and religious institutions have signed up to exit investments in carbon-intensive industries.

Meanwhile, the energy ethic and consumer behavior are amplifying each other. People are responding to today’s new energy options by installing solar panels and buying electric cars; they are insulating their homes and consuming less. These are smart decisions: energy efficiency and solar panels deliver a return on investment, and electricity used for transportation is three times cheaper than gasoline. The trends are evident: in the United States, a new home or business goes solar every three minutes, and global electric car sales have doubled for each of the past three years.

The democratization of energy is profound. In the past, centralized decisions made sweeping changes to our energy system slow and difficult. But now, for the first time, the power to change energy generation and consumption is in the hands of ordinary citizens. Homeowners can put solar panels on their roof; communities can put them on public buildings. As a result, affordable clean energy is growing much faster than experts predicted.

Since 2008, wind energy has tripled and solar has grown tenfold. Combined, these technologies now supply five percent of the energy in the United States. Last year, half a trillion dollars were invested in new clean energy capacity worldwide. The rapid growth is not surprising; clean energy is now cost-competitive.

The company I head, Apex Clean Energy, is building nearly $2 billion in wind facilities this year, which has created over 1,000 new jobs. We’re working on new development projects nationwide. The fact is, wind and solar energy generation create more jobs per unit of power than fossil fuels, and the solar industry alone employs more people today than the coal industry.

The energy ethic draws on values deeply held by many Americans: independence, self-reliance, and a sense of responsibility to future generations. Collectively, we are changing our energy future by adding more clean energy to the grid, using less gasoline, and embracing efficiency. These changes strengthen our energy ethic. We become more empowered, we refuse to be demoralized by climate change, and we reach for solutions we can implement today–in our own lives–to address carbon pollution.

So in the campaign year ahead, question the presidential candidates on energy and climate change. Let them know that an “all of the above” energy policy is not consistent with our energy ethic. We need leaders who will put a price on carbon emissions and stop fossil fuel subsidies. Together, our collective pressure will drive change and determine outcomes.

How we think and talk about energy is important. We need to share our energy ethic and the success and viability of clean energy solutions. With new technologies, individuals have the ability and responsibility to create a better energy future and a livable environment.