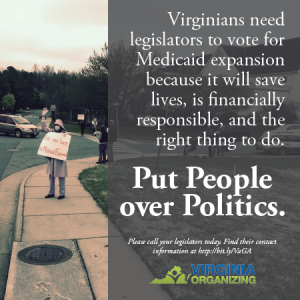 The 2016 Virginia General Assembly convened in Richmond on Wednesday. On the agenda this year are education, transportation, changes in election laws, and of course, Medicaid expansion.

We know that the General Assembly is opposed to Medicaid expansion, in spite of all the compromises that have been made to address any concerns about the program. Legislators say there is too much fraud and waste in Medicaid, but Virginia leads the way in combating fraud, waste, and abuse. Legislators claim that the program will cost the state money, so hospitals have agreed to chip in to cover costs. No matter what solutions have been offered, the General Assembly will not budge and will not offer reasonable alternative solutions.

Will you take a minute to find your legislators and call and ask her or him to support Medicaid expansion or tell us what other compromises must be made so Medicaid can be expanded in Virginia?

It is clear that our General Assembly is politically against Medicaid expansion, but the House of Delegates and Senate leadership have offered no reasonable alternative to expand health insurance to hundreds of thousands of Virginians that fall in the coverage gap.

These Virginians—people like me—are hard working and providing much needed services in our state like working in schools and preschools, building infrastructure, providing health services, and more. We’re just asking for an opportunity to see a doctor when we’re sick and gain access to preventive care to stay healthy. With the federal government and hospitals picking up the tab on this bill, there’s no reason Virginia should not expand.

Thank you for taking action!