Virginia Organizing is Trying to Do Things Their Own Way 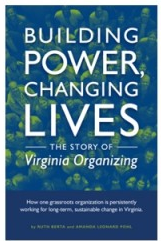 Not too long ago Virginia Organizing, formerly the Virginia Organizing Project, celebrated its 20th anniversary of putting people together to build power for change in that state. You might think that was the occasion for some serious planning and thinking about the future, but talking to Executive Director Joe Szakos on Wade’s World that turns out to be commonplace in Virginia since they pull their staff and leaders together in a retreat every April to reassess where they are going and where they’ve been. Listening to Joe reflect on the experience, they probably have lots to talk about!

Virginia Organizing is a special and different kind of organization because it is the rare community organization that concertedly bridges its rural base to the urban pockets in its state. There are organizations, certainly those affiliated with the Western Organization of Resource Councils in Montana, Wyoming, Colorado, Oregon, Washington, and the Dakotas that have deep rural roots, but place the cities secondary. Kentuckians for The Commonwealth, where Szakos’ own organizing roots first flourished was also dominated by its rural commitments with Louisville as second fiddle. In fact Szakos commented that the one thing he had learned moving from Kentucky to Virginia was to not locate the main office five or six hours away from the rest of the work, but to keep it more central in Charlottesville, and to keep out of the confusion that comes with state capitals. One of the reasons that Virginia Organizing’s work is so significant is that rural organizing is just plain more expensive, and though all people and their issues are immense and important, there are less of them to support the organization physically and financially. It also takes a special set of deep pockets to appreciate the sizzle of the work and its significance, and they are hard to find.

Much of this is covered in rich detail in Building Power, Changing Lives: The Story of Virginia Organizing by Ruth Berta and Amanda Pohl, available through Social Policy Press, and their look at the history of the organization, but Joe also filled in some of the blanks on how they had assembled a statewide network of groups run by 19 staff members, and kept it alive and growing. Organizational participants are not members exactly, but many of them are sustainers, contributing what they can and what they must along with other donors to absorb a large part of the cost. A unique back shop operation serves as the fiscal agent to 40 other nonprofit partners in Virginia and also helps Virginia Organizing absorb basic organizational costs, allowing more bang for the bucks. Collectively these and other initiatives cover 80 percent of their budget, meaning they only need to rely on foundations and outsiders for 20 percent. This level of financial autonomy has allowed the organization to speak truth to power more vocally – and critically — as they did in a lead piece last year in Social Policy entitled “Leadership is Not a Deliverable.”

Listening to Szakos it is impossible to miss how much the ideology of Virginia Organizing is focused on grassroots leadership. On Wade’s World he described a year long process of creating a team of local leaders around the state that would initially found the organization, and their commitment to these leaders has been a constant. Without a membership structure the accountability of the board and the inner working of governance is less clear to me, but the sincerity of the commitment and its role in their work is un-debatable. The same commitment to dealing with race as a central core of the work in Virginia is also a constant theme.

Start local and stay local until you win. Put all of the pieces together one by one from the bottom up until the victories can reach a tipping point across the state to make change at every level. Take the time, do the work, and think it through to the next level.

It’s worth listening to Joe. It’s worth reading the book. There are valuable lessons they are learning in Virginia, and they are glad to share them.