Home » The Issues » Anti Discrimination » Racism on Campus is Nothing New. A Sustained Anti-Racist Campus Movement Would Be.

Racism on Campus is Nothing New. A Sustained Anti-Racist Campus Movement Would Be. 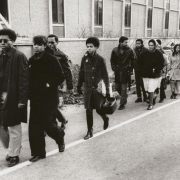 Published by the Alliance for a Just Society.

As a first-year student at Brown University I was detained for trespassing by campus security.

In my own dorm.  In sock feet.

You see, I left my dorm room to go to the bathroom and didn’t bring my college ID along. I guess I should have known better. As a black student it was always an unstated expectation that I justify my presence on campus. Black students were a small minority on campus. And we were often seen as interlopers even after admission.

I was reminded of this incident this week as protests escalated at the University of Missouri (Mizzou) over a string a racist incidents there culminating in the ouster of the state university System President Tim Wolfe. Inspired by the Black Lives Matter movement, many being veterans of the Ferguson struggle nearby, using a wide range of tried-and-true and cutting edge tactics, Mizzou students won one of their main demands, something many observers had said was impossible.

This powerful example of the power of protest and student organizing was met with rightwing media ridicule, attack by the Missouri Lt. Governor and even death threats against students. Just a day after the jubilation at the resignation of the University President, the campus was a ghost town as Mizzou students stayed away from class amid the tense climate.

Missouri students were not alone. Students at Yale University were in motion as well. Outrage over racism there was sparked by an administrator’s email communication stating that cautioning against racist Halloween costumes was a violation of free speech. Then grew over reports of a “white girls only” fraternity party the same weekend. Students at Yale were fired up by the time Mizzou made national news.

The fight was joined Thursday when the already plannedMillion Student March — demanding the elimination of all student debt, free college education for all, and $15 minimum wage for campus workers — stood in solidarity with Mizzou students.

What is new today is not racism on campuses both elite and public. It’s not student protest around the issues affecting their lives. What is new is the national scope of the protest and the breadth of the support, from professors to trade unions, to community supporters, to civil rights organizations. It brings together traditional and innovative student organizations, student governments and individuals.

Some 115 campuses took part in the protests, which were organized by United States Student Association, the Student Labor Action Project, and others. More than 1,000 students gathered at the University of California at Berkeley Thursday. It’s the kind of student action not seen in a generation.

To cap off the week, in Southern California, Claremont McKenna College Dean of Students Mary Spellman resigned Thursday amid protests there over racism on campus.

Ultimately the protests at Mizzou and elsewhere are not so much about this administrator or that as they are about demanding that institutions of higher learning create a space for students of color. It’s the same issue we were struggling with years ago.

Some commentators seem to think students protest because they are young and naive and motivated by intellectual concerns (or even under the influence of radical professors). But students today — as always — are largely motivated to action by the pressing issues impacting their lives and educations. It’s not academic.

Certainly the students in the struggles today have made mistakes — and they will certainly make more — but if sustained and nurtured, this week could signal a new multi-racial campus movement, with racial justice at its core, that could spark national change in the country in a wide range of issues. And maybe inspire others to get in motion as well.

When I was detained as a student it was not an isolated incident. Police and security harassment of black male students in particular was commonplace and some of us took to wearing our IDs around our necks as a visible sign of our alienness and defiance on a majority white campus.

It was no accident then that the student of color dropout rate at Brown was higher than for whites. We often lacked needed support and student services. Many of us were on financial aid and under constant economic pressures of working full-time while trying to get an education. A recent report says students of color at Brown today are still facing similar challenges.

So we had meetings, wrote up demands, protested and marched. We even achieved some small victories. We were also aware that our very presence at Brown was due to the successful protests of those that preceded us. It was the protests of a small group of black students in the 1960s that forced Brown to adopt goals for diversity in admissions that opened the door to our very presence.

That’s the nature of the struggle for progressive social change. Each struggle builds on those of the past. If we are successful, learning the lessons along the way to raise the struggle to a higher level.