We need a clean spending bill 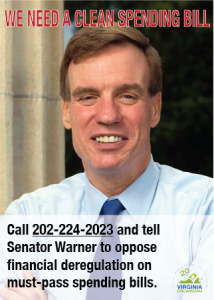 Virginia Organizing has learned that Wall Street is at it again, trying to tack some of their most controversial giveaways onto “must-pass” funding bills. To stop them, we need to keep members of the U.S. Senate like Senator Mark Warner from signing on.

U.S. Senate Banking Committee Chair Richard Shelby is one of the most prominent opponents of strong regulatory controls on Wall Street. He is now proposing to roll back protections against the kind of subprime mortgage abuses that were at the heart of the financial crisis, and gut the ability of regulators to control risk-taking at some of the largest financial institutions in the country. When “too big to fail” banks take risks, Americans get stuck with bailing them out or facing financial crises.

If other Senators refuse to cooperate with him, Senator Shelby won’t have the power to do this. But the media is reporting that key Senators—including Senator Warner—may be negotiating with Senator Shelby to attach language to weaken key financial protections to must-pass legislation.

That’s why we need your help TODAY!

“I am a Virginia resident, and I am asking Senator Warner to stand up for Main Street and keep gifts for Wall Street off the year-end spending bills. Proposals to weaken financial regulation have to be considered and voted on separately in the clear light of day. Please oppose any financial deregulation on must-pass bills like the budget or the highway bill!”<

Thanks for all you do to help defend Main Street and all Virginians!