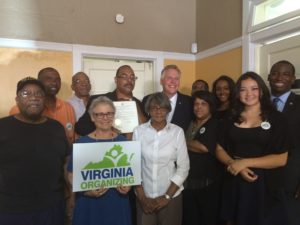 When Raymond Steverson, Jr. first tried to get his voting rights restored many years ago, he found it a very difficult process. After filling out the many forms and getting them notarized, he was told that he had to wait for five more years after his unsupervised probation was completed before the governor would restore his civil rights.

Mr. Steverson felt like giving up until he met Virginia Organizing board member Debra Grant. She helped him complete the application again, and last October he received the letter in the mail, with the governor’s seal, at long last.

In April 2017, Mr. Steverson registered to vote for the first time, and in June he will finally be able to cast his first ballot in the primary. He has become a leader in his community and an advocate for voter participation.

Barbara J. Harris tells a similar story. After returning home from serving her sentence she found she had lost everything—her profession as a nurse, her ability to get housing, and the right to vote. She says that when she learned from Sheila Carter, another Virginia Organizing leader, that the governor was restoring people’s rights, “I began to see the light at the end of the dark tunnel.”

Her rights were restored in 2015, and she was able to vote again for the first time in 11 years.
“I sincerely look forward to helping others the same way others have helped me,” says Ms. Harris.
Virginia Organizing is a non-partisan group that fights for the civil rights of all Virginians. 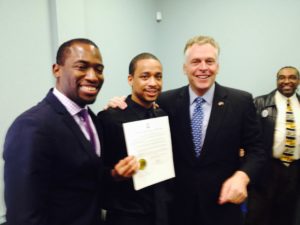 “We believe returning citizens deserve to have their voting rights restored,” said Ladelle McWhorter, chairperson. “It’s good for them and good for the Commonwealth if they are able to participate in democracy and bring their experiences to bear on the political issues of the day.”

Under previous governors of both parties, returning citizens endured even more red tape than Mr. Steverson had to go through. Many never succeeded in getting their rights back. Therefore, we applaud Governor McAuliffe for the effort he has made to sign and seal thousands of applications by hand and restore these rights to our citizens. Thank you to all our Chapter leaders who are helping people vote again.