Tamara Cherry-Clarke: May 2017 Leader of the Month 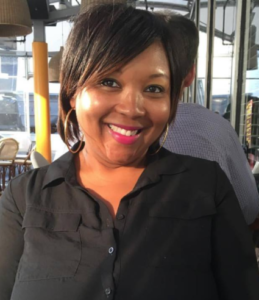 In May 2016, Tamara Cherry-Clark attended a school-to-prison pipeline community meeting with a friend from work. In the year since that first meeting, Tamara has become a leader in the New River Valley Chapter and a driving force in their local education campaign.

“Being new to the area, we wanted to know what was going on in our children’s schools,” said Tamara. “If we’re not protecting and developing our youth, where will our leaders come from in the future?”

Recently, Tamara spoke at the Montgomery County School Board meeting, her first time ever speaking publicly to decision-makers. Tamara, along with three other speakers and about a dozen supporters, shared personal stories of racism in the schools and called on the school board to respond to these incidents.

“We are all facing our own individual challenges. Virginia Organizing will stand with you and help you frame that challenge you’re facing. Social justice has always been a part of me by nature. But to actually see the action I can take is powerful,” said Tamara.

In April, Tamara attended the Statewide Power Analysis and met leaders from Chapters across the state. She can’t remember who said it but found encouragement in these words:

“We may get some push back. But Virginia Organizing will help you push through that push back!”

Thank you, Tamara, for helping build a just Virginia!