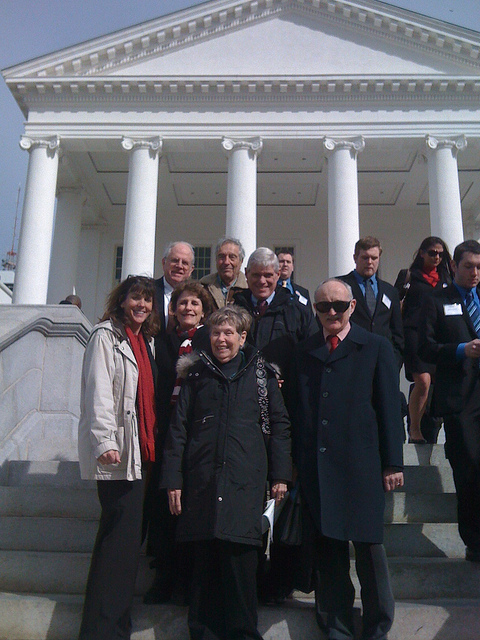 A delegation of Virginia Beach, Norfolk and Chesapeake residents visited Richmond on Thursday for a day of lobbying their legislators for immigrants rights. The South Hampton Roads Chapter of Virginia Organizing, Virginia Coalition of Latino Organizations (VACOLAO) and the Hispanic Community Dialogue joined hundreds of Virginians across the state this week and next week to oppose a slew of anti-immigrant and anti-democratic legislation in the 2011 Virginia General Assembly.

Virginia Organizing, Virginia Coalition of Latino Organizations (VACOLAO) are part of Virginia United for Immigrants Rights, a coalition of community organizations, advocacy groups, and labor unions planning over 10 rallies across the state as a part of their “Week of Action for Progress, Fairness, and Security.” The first of the rallies took place in Alexandria on February 1, and will continue in Fredericksburg, William and Mary Harrisonburg, Danville, and other towns across the state, culminating in Newport News on February 9. “The legislative proposals seek to shift immigration enforcement obligations from the federal government into our localities.  During this economic crisis Virginians should be informed that the federal government will not pick up the tab for detaining undocumented workers in our jails and prisons and that the cost of local immigration enforcement will be paid by local the local taxpayers”, said Beatriz Amberman, Vice Chair of the Virginia Coalition of Latino Organizations and Founder of the Hispanic Community Dialogue Organization in Hampton Roads. “This is unacceptable during the economic crisis our nation and our Commonwealth are going through.   Our broken immigration system dishonors our values of inclusiveness, justice and equality and should be fixed at the federal level”.

In addition, the group will oppose several of the anti-immigrant education bills that have made it through the House Courts of Justice Committee, including legislation that would keep undocumented students from attending universities in Virginia. As part of the week of action, students have held rallies at William and Mary and Mary Washington this week and CNU and VCU next week.

“I believe that it is in our self interest as a city, state and nation to embrace immigrants living in our country. Our nation was built on immigrants from many lands. Migration for economic reasons has always been part of our history. We too were strangers one day.  Immigrants pay taxes and contribute greatly to our communities. We do not need laws that divide us, deny education to children and demonize the newcomer in our communities. We need their energy, vitality and gifts for our future. We are a compassionate nation.  We bring out our best when we embrace diversity and inclusion and welcome the stranger,” Tim McCarthy of the South Hampton Roads Chapter of  Virginia Organizing.