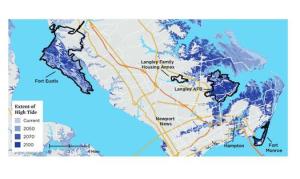 Climate change represents a serious problem for U.S. coastal military bases – especially in and around Norfolk, according to a recent study.
The report, “The U.S. Military on the Front Lines of Rising Seas,” from the Union of Concerned Scientists, looked at the impact of sea-level rise on 18 Atlantic and Gulf Coast military installations – including Paris Island, Camp Lejeune and Annapolis.

Report author Astrid Caldas, a climate scientist at the Union of Concerned Scientists, said the Norfolk Navy base has averaged about 10 flood events a year in the recent past.

According to the report, daily high tides likely will cover the entire Langley Air Force Base by the end of the century.

Caldas stressed that the Department of Defense is well aware of the issue and is actively pursuing steps to deal with the higher seas. But there has been resistance to that policy from members of Congress who criticize global warming as a hoax.

Caldas said steps such as building floodwalls and relocating installations need to be taken – and the sooner the better. But, she said, it’s all but impossible to move a huge Navy base such as Norfolk.

“With the U.S. fleet, they need deep channels for the big ships to go in,” Caldas said. “And if you talk about some places, some bases being relocated, where’s Norfolk going to go, right?”

The full report is available at the Union of Concerned Scientists’ website.