Home » The Issues » Health Care » September 23: A day to celebrate

September 23: A day to celebrate 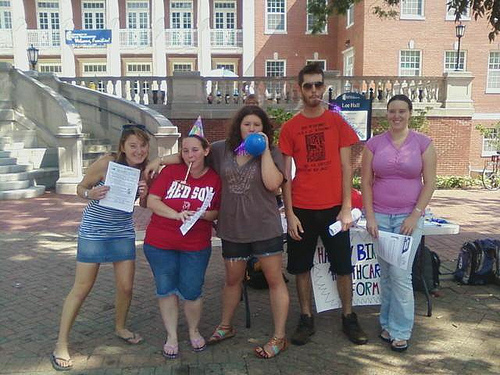 Written by Ron Pollack and Cross-posted on Stand Up for Health Care a Project of Families USA.

Poll after poll after poll has shown that Americans really do like specific provisions of the health care bill. For example, most people agree that a child with asthma should be not denied health insurance, simply because they’ve been born with the chronic condition. And most parents agree that raising the age of dependent coverage to 26 will help recent graduates entering a stagnant job market keep their insurance as they send out resumes.

Unfortunately, opponents of reform have kicked up their drumbeat. They’ve been busy all year spreading lies about what the new law means for you. And ironically, they’re still talking about the mythical death panels, even as more and more people gain consumer protections they’ve never had before.

You and I both know that Americans have waited far too long for health reform. We’ve been stuck in a system that often works for insurance companies rather than for patients, and help is finally on the way. We’ve got to counter their myths with facts and this is the perfect time to get the word out.

We are just days away from the six-month anniversary of health reform. Not only is this a perfect opportunity to look back on how far we’ve come, but also to look forward to how much we’re about to gain. Starting this Thursday, September 23, significant provisions that will ensure you and your family’s health care coverage will be protected begin to kick in.

Here’s a partial list of what you can expect:

* o Children under 26 can now stay on their parents plan or be added to it. o Insurance companies cannot retroactively take away your coverage if you get sick (also known as “rescission”). o There will be no more lifetime caps on your coverage—meaning if you suffer from a chronic condition, you won’t be told you’ve reached your limit and no health care services will be paid for anymore. o Emergency services will now be more accessible to patients, removing extra co-payments for out-of-network hospitals. o Children can no longer be denied coverage because they have a pre-existing condition. o Preventive services will now be offered free-of-charge. o Parents now have the freedom to choose their own primary care physician, or OBGYN. o A stronger appeals process means that patients are no longer at the mercy of insurance company’s decisions.

These new provisions help many millions of Americans–people who have had difficulty getting the health care they need at an affordable cost.

Now, a tight budget will not prevent a mother from taking her child to get a flu shot. A hemophiliac will not be told “sorry, you’ve hit your limit, we can’t cover you any longer.” And no one’s insurance can ever be taken away if you get sick.

Opponents are peddling cheap political points in calling for the repeal of reform. They’re not talking about the real problems that face people every day. So it’s time for us to stand up and celebrate all of the great new consumer protections we’ve gained just six months after the historic passage of the Affordable Care Act.

We’ve waited far too long, but help is finally here.