Session Aims to Deliver Understanding of Restoring Rights to Felons 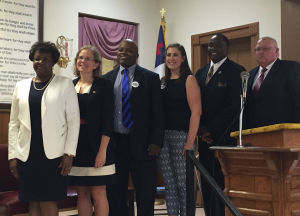 Marty Jackson recalled his “long journey” to getting his rights restored — and he wanted to do his part to help anyone else wishing to do the same.

Jackson even gave out his own personal cellphone number to more than 40 people who attended an informational session on Gov. Terry McAuliffe’s restoration of ex-offenders’ rights Wednesday evening at the Calvary Baptist Church on Holbrook Street.

The executive order was signed into effect on April 22, restoring civil rights to more than 200,000 people in Virginia. But General Assembly Republicans have challenged the governor’s decision in court, and the case soon will be heard.

“Gov. McAuliffe has been committed to second chances and restoring civil rights for our returning citizens from day one,” Secretary of the Commonwealth Kelly Thomasson said Wednesday.

The session held at Calvary Baptist Church was a chance for the community to understand what the executive order on restoring rights actually meant.

Ex-offenders who had their rights restored still have to register to vote by October if they want to participate in the presidential election in November.

For people who may have been afraid of the commonwealth restoring rights, Thomasson said that “the majority of these [ex-offenders] were non-violent felons.”

Pittsylvania County Community Action Executive Director Everlena Ross said this was a “golden opportunity” for anyone with a criminal past to become “a full participating member of the community.”

Four of those ex-offenders stood up and were applauded when asked to be recognized for having their rights restored.

Jackson said it gave him a “heartwarming feeling” to be able to pay his taxes — and his tithes.

Having rights is one thing, but having the ability to financially provide for oneself is another. Pittsylvania County Community Action Case Manager Barry Mayo announced that the Jobs and Resources Fair for ex-offenders will be held in October. He said that he and many others had been “striving for a long time” to restore rights for those who had completed their sentence, including probation.

“It matters to me that I’m a member of this community,” Jackson said.