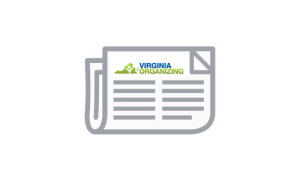 This decision is especially important to John Mahan, a resident of Henry County and local Virginia Organizing leader.

“As a returning citizen, I know firsthand how hard it can be to find a job with a criminal record,” said Mahan. “This decision will give everyone who is qualified for a job a chance to be interviewed. It shows we are moving forward in this county to give all people a fair and equal chance in finding employment.”

Betty Chew, also a resident of Henry County, worked on the “ban the box” campaign in Martinsville in 2014 and has worked to make the change in her county of residence as well.

“We feel this is a step forward in helping people with criminal records feel more accepted when reentering society,” said Chew. “The Virginia Organizing members who worked on this issue — myself included — are so excited for this great news.”

The change goes into effect in Henry County on July 1. Virginia Organizing has worked on “ban the box” initiatives across the state. Twenty-one local governments, in addition to the state and federal governments, have all “banned the box” on applications for government employment.

To interview a spokesperson for Virginia Organizing, please contact Amanda Pohl at 804-337-1912 or amanda@virginia-organizing.org.

Virginia Organizing is a non-partisan statewide grassroots organization that brings people together to create a more just Virginia.