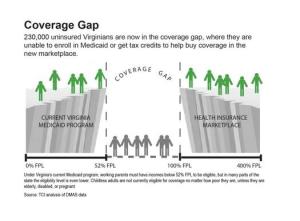 A comparison between states shows those that have expanded Medicaid are likely to have a healthier workforce. The Virginia General Assembly has so far refused to close what’s known as the coverage gap, which mostly affects the working poor.

But a new study by the group Families USA finds states that have extended Medicaid under the Affordable Care Act have seen about twice the reduction in working people without health insurance. Kentucky saw one of the largest drops.

Cara Stewart, health law fellow at the Kentucky Equal Justice Center, says a healthier and more productive workforce has been one result.

But opponents of Medicaid expansion have criticized it as a growth in government healthcare, charging the state may not be able to afford it long-term.

More than a third of Kentucky’s uninsured working population has now gotten coverage. By comparison, 16 percent of the same population in Virginia got insurance through healthcare reform.

Dr. Richard Briggs is a heart surgeon and a Republican state senator in Tennessee, another non-expansion state. Briggs is frustrated that uninsured patients at his hospital who receive heart stents sometimes can’t afford the medicine to keep them from clogging and every two weeks or so, one of these patients come back.

“In the middle of the night, through the emergency room, they’re having a massive heart attack,” he says. “The stent has clotted off. We end up taking them for emergency surgery. They come back. They’ve run up a huge bill, and they may never go back to work.”

The Commonwealth Institute says more than 200,000 adult Virginians below the federal poverty line fall into the coverage gap. They make too much to qualify under current Medicaid rules, but not enough to get subsidized insurance through the healthcare exchange.

The Affordable Care Act intended to cover them through broadening Medicaid, with the federal government picking up almost all of the cost. But the Supreme Court ruled states could turn down that option.

Note: Virginia Organizing State Governing Board Treasurer Ray Scher discussed this report on a FamiliesUSA conference call, helping to raise the stories of people who do not have access to Medicaid in Virginia.