Home » The Issues » Economic Justice » Study: One in Three Virginia Children Lives in or Near Poverty

Study: One in Three Virginia Children Lives in or Near Poverty 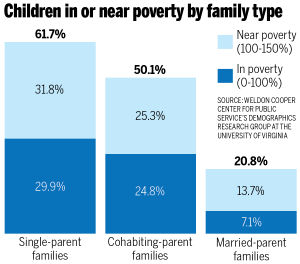 One in three children in Virginia is living in poverty or near-poverty, according to a study from the University of Virginia.

The study factors for different costs of living in different parts of the state.

Rorem and Juelfs-Swanson found that after you take these factors into account, the poverty rate is lower — the study found 13 percent of the state’s children live in poverty, compared with the federal rate of 15 percent. They also examined an overlooked demographic: children whose families are living just above the poverty line.

The study found that about 18.5 percent of children in Virginia live in near-poverty, defined by the researchers as an annual income between $29,000 and $43,000 for a family of four. That’s a precarious position for families, Rorem said, as any setback could ruin them.

“That’s the area where unexpected medical expenses or a car breaking down or a parent losing a job leaves a family in dire circumstances,” Rorem said. “These kids matter as well and are receiving necessary benefits to keep their families afloat.”

Poverty is often associated with single-parent families, and the study did find that children with unmarried parents made up 46 percent of youths living in poverty or near-poverty. But another 45 percent of them lived in married, two-parent households. Rorem said “family values” solutions encouraging people to get married would have no effect on the latter group.

“One thing that’s often touted as a way to help families get out of poverty is to get married,” Rorem said. “Whether or not that’s true, we’ve got half of these kids living in poverty who are in married households.”

Rorem added that she doesn’t think the correlation between single-parenthood and poverty shows “causal analysis.” She and Juelfs-Swanson suggest providing affordable, high-quality child care could help many single-parenthood households climb out of poverty.