Medicaid: State Legislature Urged to do the Right Thing 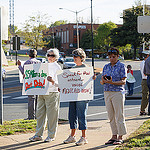 By Sandra A. Cook and LeeAnn Hall

House Speaker William Howell is digging in his heels against accepting federal funds to expand health coverage in Virginia. So far he has managed to hold his caucus together to block all proposals to get more Virginians covered through Medicaid.

But stonewalling the expansion of health coverage won’t make this issue go away. In fact, it will only bring more attention to the issue, and more pressure to move forward, as the possibility of a shutdown of the state government becomes more real if the House of Delegates continues to block the coverage expansion.

All Virginians have a stake in this debate. Accepting the federal funds would bring health coverage to an estimated 400,000 Virginians, coverage that will—according to the latest research—literally save lives. These 400,000 Virginians are working hard to provide basic needs for their families. They work in multiple industries across the state, from child care to restaurants to retail and more.

Everyone has a stake in this debate. But, at the same time, the issue of expanding health coverage has particular significance to women in Virginia. Expanding health coverage is a women’s health issue that Virginia women take very seriously. Members of the House of Delegates, where men hold four out of every five seats, seem to ignore this.

The women’s-health case for expanding coverage is clear. In 2010, more than half of the 19 million uninsured women across the country had incomes low enough to qualify for health coverage under the expansion of Medicaid made possible by the Affordable Care Act. If every state adopts the expansion, together we could cut the uninsured rate among women in half.

This is a critical opportunity to tackle gender-based health disparities. Almost 40 percent of women live with a chronic health condition that requires ongoing attention (versus 30 percent of men). Women have higher rates of asthma and arthritis, and double the rates of depression and anxiety compared to men.

When women go uninsured, these health problems go unaddressed and the disparities worsen. Getting hundreds of thousands more Virginia women covered may not eliminate these disparities overnight, but it’s a necessary first step.

The House of Delegates’ failure to move forward on health coverage isn’t just negligence. It’s an active choice to shut the door in people’s faces. And it’s shutting hundreds of thousands of Virginia women out of access to health care.

None of this is lost on civically engaged women. A poll of likely Virginia voters conducted by Public Policy Polling in early April found women voters think Virginia should accept the federal funds to expand health coverage by a margin of 16 points. The support for Medicaid expansion among Virginia’s women and all Virginians is obvious, regardless of political affiliation.

Medicaid expansion has been billed as a hyper-partisan issue, but it is not. There are supporters of expansion from all ideologies, because Virginians know that what matters is getting coverage for those who need it, adding jobs to our economy, and being good stewards of the federal tax dollars we have already paid by bringing monies back to the Commonwealth. Medicaid expansion makes sense, which is why so many Virginians support it.

Sandra A. Cook is the chairperson of Virginia Organizing, a nonpartisan statewide grass-roots organization.

LeeAnn Hall is the executive director of the Alliance for a Just Society, a national research, policy and organizing network.